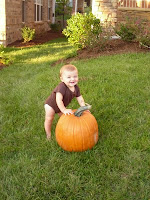 Roman is nine months old and on the go. He is crawling all over the place and pulling himself up. He has just started to go from one piece of furniture to another without falling. He is so proud of himself. When he pulls himself up, he will turn around to make sure you are watching him. He has also received his two bottom teeth and one top tooth. It is so cute when he smiles.
Roman had his first 'run in' at the sitters. Unfortunately, Roman was bit on the cheek by another little boy. He took it well and did not retaliate. Don't worry-all is well and he is doing great. A little bite is not going to slow him down. Mommy just thinks he is so sweet that the little boy just wanted to eat him:)
Speaking of eating..Roman is eating 3 meals a day instead of bottles. He loves table food and pancakes have become his favorite. He is becoming very independent and likes to feed himself. We are still working on using the sippy cup. He does however, still get a bottle in the morning and at bedtime.
This month has been busy. We enjoyed having friends visit from out of town. While they were here, we had a party and cooked a low country boil. It was a lot of fun and the food was delicious. Grandma Moyers also visited and bought Roman his first pumpkin. We also attended a baby shower for some friends and a birthday party for one of Roman's 'girlfriends'. We are looking forward to more family visiting later on in the month.
We have been enjoying the cooler weather and are looking forward to our trip to Mexico in early November. We are excited that Roman has the opportunity to visit another country at such a young age.
Mom and Dad are doing well. We are just enjoying our little 'Mr.' and trying not to work too hard:)
Check out our photos for September and video of Roman on the Go!