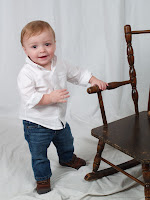 Happy Valentine's Day! The Przygoda household is filled with love. This has been a fun month. Roman has gone from walking with a wobble to just about running. He is into EVERYTHING! I can't believe that you can have a million toys and a kid won't even play with them. He is much more intrigued with the kitchen cabinets, refrigerator (which he got into the other day and tried to grab a beer), dog bowl, and just about anything he is not suppose to have. He is becoming much more independent and will definetely let us know what he wants and when he wants it (which is NOW!). He is talking a lot more and will imitate just about anything you do. His new words this month are touchdown and more. He was in the 50th percentile for his height and weight at his one year check up but they said his head was in the 90th. You just have to laugh. Poor Guy! He inherited the Francis head and he will just have to grow into it. The rest of us did:) Besides that, he is doing great developmentally and is advanced in many things-so the doctor says. Some of Roman's favorite things to do at this time are riding in his wagon, chasing Mango, talking on his cell phone, reading his books and brushing his teeth. I can't believe he is a little boy and not a baby anymore. He is officially off the bottle and I think that was harder for Mommy than him. He is sleeping about 12 hours a night and it's a great thing since I have to get up so early. I am training for a 10K and have been running about 4 times a week before work. It is so hard to get up so early but it makes the rest of the day great. It has become my time and it is actually relaxing. I encourage all of you to find something to do for yourself and make that a priority. It is so worth it and makes you feel great.
Some of the highlights of this past month were going on hikes, Super Bowl (Matt's 30th-Happy Birthday!), Party with RHD friends, game nights with the neighbors, enjoying visits from family, taking Roman to his first museum (Marbles), Roman's first snow storm(he wasn't sure of the snow at first but he laughed when the kids were throwing snowballs), Naomi's 29th birthday, and many nights hanging out enjoying each other's company.
Roman is looking forward to Baby Wright joining the clan. He is being stubborn and giving his mom a hard time but hopefully by the end of the day, he will arrive. We are super excited about another boy. We love all the girls but boys rule!
This month's blog is dedicated to my mom. It is her birthday this month and I want everyone to know how great she is. She is my best friend and Roman loves his grammy.
Check out the latest pictures. Click Here