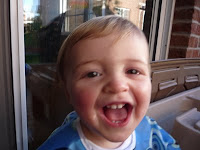 Roman is 15 months old. This month has been a lot of fun and Roman has been such a joy. His vocabulary is growing every day and he will try and repeat whatever you say. Some of his new words this month are Boots, Dora, Swiper, Tigger, ball, and tractor. The words he chooses to say crack us up. He still won't say MaMa unless it is urgent. He calls me NaNa. I guess he has a mind of his own and will say what he wants when he wants.
Roman has started sitting on the potty. Ms. Lora believes in potty training young. We would be thrilled if this happened has diapers would no longer be needed. He has only peed once so far but he loves his froggy potty. He was so proud of himself when he went. He stood up, looked in, and clapped. What a ham!
This month we attended a baby shower for a close friend. Roman stole the show. We look forward to Zoe (Roman's future prom date) joining our world. We have gone on many hikes and Roman loves to hold Mango's leash. Even though Mango is only 11 pounds, she still pulls Roman. He doesn't know that though. Roman and I flew to NY to visit family. Roman did OK on the plane but he definitely doesn't like to sit still. He had a great time playing with cousins, riding Grandpa's tractor, playing in Grandma's toy cabinet, and feeding Tiger(Grandma's cat) every morning. It was a nice way to spend my spring break.
Roman received his first bloody nose and fat lip this month. He fell and hit face first. He got right up and started playing. What a tough guy! It really scared mommy though. I am just waiting for the first trip to the ER. Hopefully we won't ever have to do that.
We had a nice Easter weekend. We got together with some friends and dyed Easter eggs. We went to church and saw some old friends. We than went to brunch at Bob Evans and Daddy and Roman took a nice bike ride in the afternoon while Mommy took a nap. Unfortunately all good things have to come to an end and we are off to work tomorrow.
Rick and I were able to get away and go to a Hurricanes game. Rick has also been able to get together with the guys and he also got to dust off his golf clubs. All in all things are good in the Przygoda household. We are thankful for all our blessings and look forward to a wonderful Spring!
Click to view pictures- March and April