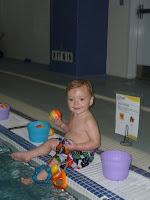 Roman is 16 months old and on the go. He is practically running everywhere and the world has become his playground to explore and learn new things. He has officially been initiated into the bumps and bruises club. I guess this is the territory that comes along with having a boy. He is talking all the time (although mom is the only one who understands him half the time) and he will sing to himself in the car. His car seat is like his throne and he will sit there with his arms on the armrest and look like he is running the show. He is becoming so much more verbal with telling us his wants and needs and is using the sign language he is learning. It is amazing to see how much they can learn and know when to use it. He has become such an affectionate child. He loves to give kisses and will chase Mango until she kisses him.
Roman received a clean bill of health at his last check up and he is finally starting to grow into his head. He is doing very well with his potty training and loves to put fish stickers on his ocean picture when he pees. They call him 'Rocket Man' at daycare because he is so good at it. He is such a typical male-he will sit on his potty, read his books and be absolutely content. He has been taking swimming lessons and loves the water. He is submerging under the water and learning how to float on his back. Look out Michael Phelps, here comes Roman Przygoda. With a name like that, he is bound to do something famous.
This past month we had a get together with our RHD friends, had a luau with neighbors, attended a festival where Lovey was almost lost (thank God for security who chased us down to return him), took many walks, hikes, and bike rides, and spent some good time with friends. We had some good friends from Baltimore down for a weekend where Uncle Chris (Roman's Godfather) watched him for a day. They had a wonderful day and I am sure Roman gave him a run for his money. We went strawberry picking and Roman was a big help putting the strawberries in the bucket. I have had a few girls nights and Rick went with the guys this past weekend to Darlington for the race. Today I had a great Mother's Day. Rick let me sleep in-even after only a couple hours of sleep. We had a nice bike ride together as a family and then enjoyed going out for some ice cream. It was a nice, relaxing day with my boys.
We would like to congratulate Dave and Jamie Dailey-our great friends from Colorado. They had a little girl named Elin. She is lucky to have such great parents and we wish her health and happiness.
To all the moms reading this- you are great at what you do and being a mom is the most important job you will ever have. Hold your kids tight, give them lots of kisses, and capture every moment as it may be your last. Take care of yourself and know they are always watching you. HAPPY MOTHER'S DAY!
Click to see Pictures- April May