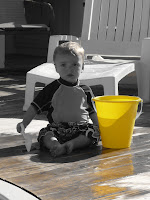 This past month has been filled with many adventures and memories. Roman is talking so much and will repeat just about anything you ask him to. He also said I love you for the first time. When he does it, he will throw a kiss. It is adoradle. He is becoming a big helper with cleaning up and he hates when things are out of place or when the floor is wet. I wonder where he got that from? He is even learning how the DVD player is working. He took the DVD case and put it under the DVD player. He knew it had to go somewhere. He then went and sat on his chair and waited for it to play. He loves airplanes and will stop whatever he is doing to go look for one when he hears it. We have taken him to the observation deck at the airport a few times and he loves it. Roman has quite the arm on him. He loves to play ball and he is throwing everything. WATCH OUT! Yankees should be sending a scout out any day now:) He is enjoying his swimming lessons and he loves playing in his sand table and riding his tractor. He will be a great help to Poppy when he gets older. We will send him off to the farm to learn some good work ethic. Roman is also becoming very friendly. He waves and says hi and bye to everyone he sees. We were in a store today. He waved to every manikin that we walked by. He even wanted to shake one of their hands. He didn't even care that some of them were headless.

We have been doing a lot of biking and Rick just received his early Father's Day/Birthday present. We bought a home gym for the garage. The garage is now the Guys Hangout. Playroom at one end and gym at the other. Tickets to the 'gun show' will be sent out soon.

We spent a nice, relaxing vacation at the beach with some friends. We had lots of laughs and the kids had a great time playing in the sand and pool. Roman was not a fan of the waves but decided the sand wasn't so bad. Rick was able to go golfing with the guys while the Mommy's had some bonding time with the kiddos.

We were lucky to have both Grandma's in town this month to watch Roman. Grandma and Grandpa Vern were down for a week. They had a great time with Roman. I am sure Harris Teeter misses Grandma coming in and getting Roman his free balloons. Grandma Francis (Grammy) was in town right after that. Roman had a good time baking with Grammy.

One of our good friends had a baby this month. Welcome Zoe Shaw to the world! We love you!

I am now done with school for the summer and look forward to all the bonding Roman and I will have. We have many activities planned and we will stay busy. We are off to NY to visit family and friends next week. We look forward to a great summer. I am sure many more great memories will be made. Make sure to enjoy your summer and take time out for the things you love!!!
Click for recent photos May June
Click video for a hillarious look at Roman