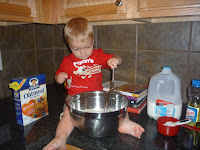 This has been another fun filled month at the Przygoda household. After spending a great week with my niece visiting, we spent the weekend in Columbia, South Carolina visiting some friends. It was nice meeting their new daughter Elin and swimming in the pool.

The past three weeks, I have been babysitting a friends baby named Zoe. Roman has been such a great help and he loves to hold the bottle for her and throw the dirty diapers away. He became very protective of her and was acting like a big brother. NO-this does not mean he is ready for a sibling...it just means he is a great friend:)

Rick and I went to a Rascall Flatts concert with some friends. Unfortunately the show was not too long but it was nice to get out and listen to some good music. We also celebrated our 5th anniversary. He is an amazing husband and father and I feel so blessed to have spent another year with him. Ordering Chinese for dinner and champagne was a great way to spend the evening.

Roman had his 18th month check-up and is doing great. He is hitting all bench marks and growing. He is finally growing into his head (75th percentile) but unfortunately the doctor's office is not his favorite place to be. As soon as the doctor walked in, he ran to me and waved good bye to her.

Roman is continuing his swimming lessons and he is now swimming distances under the water and jumping in the water on his own. He loves the pool but not the lessons. He only wants to play and swim when he wants to. He is already being stubborn in class and bubbles have become the magic to keep him involved. He is continuing to amaze us everyday.

My summer is coming to an end. I have enjoyed having time off with Roman but I know he will have a great time with Ms. Lora and playing with his friends. I return to work on Monday for a new school year.

I hope you have all enjoyed your summer and made many memories.

Click on the links below to view our photos and video of Roman playing with Mango.