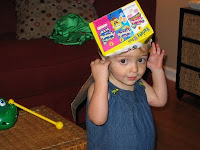 This has been another crazy month with many ups and downs. I have returned back to work and summer is officially over:( I am having a good start to the school year. My class seems to be adjusting well and my days fly by. I am just amazed how exhausting it is to teach 23-first graders all day and then come home to a 'wild man.' We have gone through a rough patch with Roman and him waking up very, very early every morning. He would not even lay in bed with us and watch TV. He was wide awake and wanted to go downstairs and play. This is what he does when he is teething. He has got two more teeth. It is amazing what lack of sleep will do to you. You just have to remind yourself that it is only for a moment and you will get through it. For the moment, he is doing better and has returned to sleeping in later. Thank God!!!!!!!
Roman is having a great time back at Lora's and playing with all his friends. Our friends little girl Zoe, has joined him there and he is showing her the ropes. Hopefully he is making a good impression on her since they will be future prom dates. Roman has been going on the potty at daycare but refuses to go for us at home. He has also become a very picky eater and I am afraid he is going to turn into a grape since that is all I can seem to get him to eat lately. He is growing up so fast and I am amazed how much he is learning. He is now putting two to three words together at times. His favorite word right now is 'athen' (again). Everything you do he wants you to repeat it.
Rick has done some traveling this month for work so Roman and Mommy had some great bonding time. We LOVE when Daddy returns though. We have had some family in town. My brother and his family were down for a long weekend and we spent some time at the pool, cooking out, and we went to Marbles. Roman had a blast and he loved the water table. Unfortunately it did not last long because he decided to dump the bucket of water over his head. So much for the smock. I guess he needed full rain gear on:) This past weekend Rick's mom and step dad were in town. Roman spent some time with Grandma while Grandpa Vern, Rick, and myself went to a Durham Bulls Baseball Game. Our friend Melissa caught a ball (well, it was thrown to her after the outfielder caught it) and we gave it to Roman when we got home. He loved it. He was playing catch with Grandpa and kept saying 'got it'. He has quite the arm on him and loves throwing balls. T-ball is definitely in his future.
Roman has moved up in his swimming class and he is swimming longer distances and is learning to dive under the water on the steps to get toys. We just signed him up for the next session which lasts until December so hopefully he continues to enjoy it.
It is now football season and Rick and I have joined a Fantasy Football league. I am clueless at what is going on but I guess this will be one way to learn. I figured since I would be forced to have the games on my television, I could at least have someone to root for.
Fall is right around the corner and the year is flying by. I hope you all had a great summer and we look forward to having a fun Fall with all the autumn festivities that come along.
Check out the August photos.

Ed Kwiek said…
I wonder if Roman's love of grapes has been handed down through his dad's genetic predisposition to love fine wines...
September 12, 2009 at 5:53 AM

Unknown said…
We can understand the toll that lack of sleep takes.. Lets see, we are going on 5 years of it now! :). Hang in there! He will be a good sleeper for you. He is so handsome.