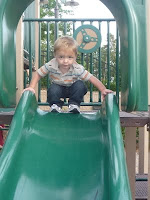 Happy Fall! We have had a great beginning to the Fall season. Football is in full swing, baseball is coming to an end-GO YANKEES!!! and the weather is getting cooler.
Rick was able to go to New York for a long weekend to visit family and attend his cousins wedding. During this time, Roman and mommy had some great bonding time and mommy is learning to make ramps out of many household items for Roman's cars.
Rick and I were also able to go to the U2 concert and it was awesome! We tailgated with some friends and than watched an amazing artist perform. Even though we had to wait over an hour to leave the parking lot from all the traffic, it was sooooo worth it.
Roman has finished up another session of swimming lessons. He is doing great with his skills but does not like the instructors and is having a hard time with following the schedule. He just wants to play with the toys and be on his own schedule. I guess this is typical of someone his age but it is hard when you are paying money to have him not appreciate it. At least he is learning skills that he will hopefully use as he gets older.
Roman loves playing with cars, trucks, airplanes, and trains. He is learning his colors and how to count with the cars. He has a cabinet in the kitchen that is his. We have filled it with 'his groceries'. He loves to take out the items and pretend play with them. The other day he took out the yogurt cups and handed me one. He said, 'here you go'. It took me a minute to realize he had just said a sentence that was clear. He is really starting to talk a lot more and put words together. He is also finally starting to use the word 'mommy'. I think he has learned that the word has power if he uses it:) He loves music and will ask for the music to play in the car before he even gets in the car seat. He also knows that he has more than one cd and will ask us to change it. He definitely is a child who knows what he wants and knows how to get it.
We took Roman to a local farm where we saw some animals, picked out a pumpkin and went on a hayride. He loves tractors but was not sure of being in the back on a wagon. He was clung to me the whole time. He loved picking out his pumpkin and rearranged all the pumpkins at the patch. I guess he saw a different way they needed to be organized. It was hilarious. A little man after my own heart.
We are looking forward to the cooler weather, watching the leaves change colors, and most of all watching Roman explore the world and become a little boy. He brings such joy to our lives.
Enjoy the pictures of the past month.