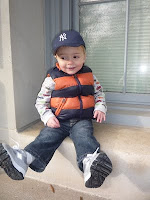 December is here and Christmas is upon us. Santa, Baby Jesus,Christmas parades, cookie bakes, Christmas shoping, gift wrapping, card sending, tree decorating, get togethers with friends and family-talk about ending the year with a bang!
This past month has been filled with more great memories. My parents (Grammy and Poppy) were down for a weekend to celebrate Thanksgiving/Christmas with us. Roman loved the tractors they gave him and we can't wait to see them again. We drove to Baltimore for Thanksgiving weekend to visit some friends and we had a wonderful time. The guys fried a turkey outside while the girls prepared the rest of the food and kept Roman occupied. We went down to the harbor and saw Santa and I am pretty sure Rick was happier to see Santa than Roman. Roman was all about going into Santa's house but did not want to sit on his lap. I guess they eventually learn that Santa is not such a bad guy afterall. While in Baltimore, Roman decided that he no longer wanted to sleep in a pack n' play. He was very quiet one day during nap time so I decided to go check on him. Well, when I opened the door I discovered him standing outside the pack and play (Lovey in mouth) ripping up Uncle Chris' mail and dropping it in the pack n' play. Needless to say, he did not nap that day and we had to rig the bedroom up so he could not escape that night. As soon as we got home, we converted his crib into a bed and another milestone has come and gone. These are such bitter sweet moments:)
We had a wonderful photo shoot of Roman. A friend I work with takes pictures so we went downtown to capture the last days of Roman being a one year old. He was such a little model and the pics turned out great.
We celebrated with neighbors the one year anniversary of a friend who received a lung transplant. He is such a trooper and an inspiration to us all.
We also had our Annual Christmas party where we ate lots of yummy food, chatted with friends, and drank too much(according to the recycle bin). It was a successful party and it is always so great to get your friends together and enjoy their company.
I was able to go out with some neighborhood friends for dinner and exchanged white elephant gifts. I ended up leaving with a nice scarf and someone else left with a can of beans and a picture of me (Kirsti-I better see this up in your house LOL!) It is always nice to get away and do something for yourself. Rick's guys night out is coming up and I know he is looking forward to that as well.
Rick's mom and stepdad (Grandma and Grandpa) were just here for the weekend to celebrate an early Christmas with us. Roman was very much spoiled and received way too many toys and gifts but he loved them all. It is always so nice to have family in town and I know Roman enjoys getting so much attention.
We are looking forward to a great Christmas. My brother and his family will be joining us and I know Roman is going to love all the presents. This year he finally gets what is going on and knows that the presents are for him. I can't wait to see his face when he comes down the stairs and sees the gifts under the tree. These are the moments I want to cherish forever.
We will also be celebrating Roman's second birthday on January 13th. I can't believe the time as flown by. We are raising a little man and no longer a baby. We love you Roman and wish you the very, merriest Christmas and Birthday ever. May 2010 bring you many smiles and always know that Mommy and Daddy love you very much!
Merry Christmas and a Happy 2010 to all our friends and family.
Click on the links on the upper right side of the blog to view photos and videos.