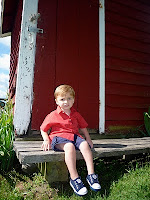 Well, I am officially on summer break. I wrapped up my 8th year of teaching and said good bye for the summer. I have enjoyed, like always my time with Roman. Being a stay home mom is so rewarding but a much harder job than any other-and I only have one. We enjoyed having Rick's mom down again for a visit and Roman is finally calling them "Poppy and Nana". We are working on having him distinguish between my parents and Rick's mom and step dad.
We took Roman to his first movie this past month and saw Toy Story 3. He loved it but unfortunately we did not make it through the whole thing. The previews were so long it took up a lot of his "good" attention. Oh well, we look forward to it coming out on Blue Ray.
Roman and I took a road trip up to New York to visit my family. We stopped half way in Baltimore and stayed with friends for a night to get a break. We walked around the park and fed the ducks and enjoyed playing on the playground. The following day we continued our trek and arrived in Berne with minimal complaints from Roman. He enjoyed playing with his cousins, catching frogs, wandering the fields, and watching Poppy drive the tractors. We had some kind of party each night whether it was popcorn, ice cream, or a bonfire. We took some great pictures while we were up there so make sure you check them out. I know Rick enjoyed a break and his independence for the week. It was a great trip and Roman is still talking about it.
We enjoyed taking Roman to his first fireworks show. We went with some friends and we had a great time. While we were there, a man drove his car where he was not suppose to and it happened to be right near us. Needless to say there were lots of police cars and the man was arrested. It was some great entertainment and I am not sure that Roman remembers the fireworks because he just keeps saying, "bad boy take him away." Oh well, hopefully it was a life lesson for him:)
Roman is quite Mr. Independence. His new thing is that he no longer wants us to get him up from his nap. He likes to wake up on his own and walk downstairs by himself. What a change from him screaming for us to come and get him. He also has become very meticulous about how his toys are displayed. He lines up everything and it has an order. If you try to touch it, WATCH OUT! He is so me. It is kind of scary. For those of you who know me, this will be funny. I asked him to put his dirty clothes in the hamper. He threw them in and walked away. As he was walking away he looked over his shoulder and noticed that the pant leg was hanging out over the side of the basket. He had to turn around and go back and fix it. I just stood there with an OH NO feeling. What have I created? He will make a great husband some day.
Roman has a newly decorated bedroom. We turned it into a big boy's room. Mom even painted a little mural for him on the wall. He loves his new room and I can't believe I no longer have a nursery.
He is singing his ABC's, counting to 10, and he has recently learned that is birthday is in January. We love watching him grow and he is quite the entertainment. He brings joy to us every day.
Well, in a few weeks Rick and I will be off to Florida for a week without Roman. I am looking forward to a week of Independence for myself although I know I will miss him tons.
Make sure to check out the pictures on the right side of the blog. We hope you are all having a great summer and staying cool!