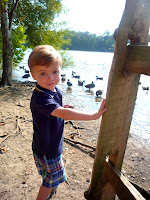 Well, where to begin. Let me first say that this has been one of the most exhausting months of our lives. There has been so much sickness in the Przygoda household and it has taken a toll on us. We all have this horrible cough that will not leave and it is keeping us all up at night. Roman has been waking up several times at night and the last few nights he has just slept in our bed. At least we are able to get a little more sleep that way instead of getting up every couple of hours. Roman and I are finally starting to feel better but poor Rick is still struggling and is actually on his way to the doctor. It is amazing how lack of sleep makes life so much more of a struggle. Hopefully we are on the ups!
School is in full swing and we are back to our routine. Roman is loving being back at Lora's and playing with all his friends. Whenever he gets mad at me, he says that he misses Ms. Lora. I guess he really does love her. It is such a comfortable feeling to know that.
We took a long weekend and went up to Rochester to visit family. It was nice to see everyone and Roman still talks about going to Poppy and Nana's house. He was so good on the plane rides. He had his own seat and he insisted on keeping his seat belt on the whole time and kept saying that we took off and were flying. I was so pleased that he made the trip pleasant.
Roman is just about potty trained and wearing his big boy underwear when we go from one place to the next. He is still wearing his diaper at night but he is telling us when he needs to go. We have used the naked potty training method. When we are home, he is naked and the potty is in the living room. He has been so diligent at going and I can't believe I am just about at the point where I don't need to buy him diapers. He has been so much fun this month (besides the waking up at night). He is so funny with what he says and he is so affectionate. Some of his funniest sentences so far are: "Mommy mad because Daddy take her car." "Mommy eat celery like Ming Ming on Wonder Pets." ( I love that he is making connections-he does this all the time.) "Mommy, Roman sick. I eat buggy's in my tummy." "Don't be scared Mommy, it is just a toy." He has increased his academic skills as he can now count to 15 and tell us his birthday is January 13. Roman has been introduced the the Superhero world and is loving them. He loves to wear his Superman and Batman cape and watch the movies. He has informed us that he has Superman power and will point his finger at us. He has told us that I am Bat Girl, Daddy is Robin, and Mango is Scooby Doo. He got this from a Scooby Doo and Batman movie. He insists most mornings to wear his cape instead of normal clothes. What happened to my GQ boy?
We have enjoyed many trips to the park where Roman is loving feeding the ducks. I was able to have a girls night out where we enjoyed dinner and a movie. I was proud of myself that I was able to 'hang' with the girls and I didn't get home until 1am. Our friends the Jones' welcomed their new addition-their baby girl. She is so cute and we are so happy for them. We enjoyed a nice, long Labor Day weekend. We had some friends over for a low country boil one night. The kids tore the house apart but it was so fun getting together with great people. The next night we hung out with neighbors eating yummy appetizers and sitting by the fire. It has been so nice now that the nights are cooling down. I actually had to wear a sweatshirt the other night. I have been consistent with my running and am looking forward to my race next month.
I hope you have all enjoyed your last few weeks of summer and keep us in your prayers as we are still working through this sickness and sleepless nights.