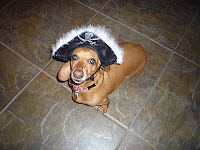 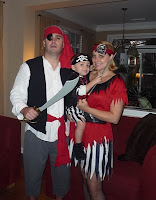 Fall is our favorite time of the year. One of our traditions is the state fair. Nana was in town and got to enjoy it with us. We ate yummy food, went on a pony ride (Roman did not like it. He said, "Too bumpy".), enjoyed the animals, and dodged the crowd. We also enjoyed the Farmer's Market where we picked pumpkins and bought apples. Pink Lady apples are the best. If you have not tried them, you must!
I participated in a diabetes walk. It is so amazing to see so many come out for one purpose. It is awesome to see what many can do when we work together.
Halloween was a blast for Roman. He understood it all and was so into it. He enjoyed decorating the house and carving pumpkins. We went trick or treating and Roman was such a trooper and kept saying, "Next house now." We went to a Halloween party at our neighbors where Roman won the best children's costume. He was a pirate. We were all pirates. One big happy pirate family. ARG!
Every night we had to walk the neighborhood and look at all the 'scaries' in the trees. When Halloween was over the decorations were taken down. Roman had a complete meltdown. He was so devastated and cried for about 15 minutes with the biggest crocodile tears. I felt so bad. I had to talk to him about how now it is all about the turkey. It was so cool to see how well he understands holidays now. He is growing up so fast.
We took Mango for her yearly check up this past month. Roman did not like when they were checking her. He was very protective of her. They said she needed to lose a few ounces. So yes, Mango is on a diet. Poor girl, I think she misses that Roman doesn't really drop food anymore.
I enjoyed another nice night out with the girls. These nights are so wonderful and refreshing. I wish I could get more of them.
Rick had to go for a sleep study to have his snoring checked out. Those of you who know him, know that this is a HUGE problem. He also went for a cat scan. We are now waiting to see what the doctors have to say so we know where we need to go from here. God I hope they can help him...we are way too young to be sleeping in separate bedrooms.
Some of Roman's new favorite phrases this month are, "Oh Man", "No Way", "I have that"(he says this for every commercial on tv-when you ask him where it is, he says that it is at Poppy's house). His new favorite show is Dino Dan. He loves dinosaurs and pretends that he is a T-Rex all the time. I am pretty sure there is a Dinosaur themed birthday party in the future.
I am continuing to run but am working on my time now. My next race is on Thanksgiving morning called the Turkey Trot. It is only a 5K. I am working towards finishing in a fast time. After that, who knows what I will run. It is so relaxing and the races are addicting. The training is the hard part.
We are looking forward to Thanksgiving. My brother and his family will be in town to spend it with us. We love them so much and love when they come to visit. The turkey will be fried and many laughs will be laughed.
During this month reflect on all the things you are thankful for. We are all so blessed in many ways. I am so thankful for all the wonderful friends and family that are in our life. I thank God for the decisions we have made to get us where we are today. Enjoy the photos from the past month-there are new ones in the October album.