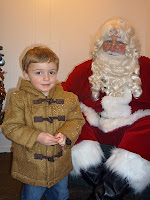 Winter is officially here. BRRRRR!!!! It has been so cold. We even had snow already. Roman was so excited when he saw the snow falling. We were walking out the door to go play and he ran to the refrigerator. I asked what he was doing and he said, 'I get carrot for the snowman nose.' There wasn't enough snow for a snowman but we did manage to make a snowman head. The carrot came in quite handy. He is such a smart boy. He had been telling us that snow was coming because the leaves were all gone. During this little snow fall, we went to a local farm and visited Santa. Roman was so excited whenever we would talk about going to see him. As we were walking towards him I could see Roman was getting nervous and realized that all the talk about Santa was coming to pass. He would not sit on his lap but he did give him a high five and tell him what he wanted. He also told him all about Charlie. Who is Charlie you might ask? Well, we have started this tradition called Elf on the Shelf. There is this book that explains how an elf comes to your house and watches you and reports to Santa when you are asleep. Every morning you have to search for him. Sometimes he even leaves presents. One night the doorbell rang and we had Roman answer it. There on the door mat was the book with the elf. Roman named him Charlie and the tradition began. It is helping us out with behavior and it brings more fun to the Christmas season.
Well, let me back up a little and talk about our Thanksgiving. We were happy to have my brother and his family with us for Thanksgiving. We of course fried our turkey. As we were sitting down to eat we realized that we forgot the cranberry sauce and stuffing. Can you believe we had Thanksgiving without stuffing. Oh well, the rest was delicious and we had wonderful company to share it with. My nephew Turner and Roman were like two peas in a pod. They were great buddies all weekend and Roman loves his cousin. Thanksgiving morning my sister in law Michele, my niece Rylee, and myself ran in the 5K Turkey Trot. I beat my time and I was also very proud of Rylee and Michele as it was there first race. I want to give kudos to Rylee for passing her drivers test on the first time. Great job and we are very proud of you. It is amazing our fast the kids grow up.
Rick is finally getting some good rest with his cpap machine. He is feeling restful and I get to sleep with a husband who no longer snores. The only problem now, Roman is waking our peaceful sleep very early in the morning. We have tried many different things to get him to stay in bed longer but nothing is working yet. I have ordered a sleep clock so I will let you know next month how that goes. Wish us luck!
This past month I had a cookie bake with some friends and enjoyed a date night out with Rick. I even visited a friend who had her baby girl on Thanksgiving. Ella Ruth was beautiful and Roman will be her protector as she will be joining us at Lora's shortly. Even though these adult nights out are few and far between they are so needed. I encourage all of you to get that time. It makes everyone so much happier.
School has been super busy and the kids are definitely keeping me on my toes. I have had the opportunity to learn many new technology skills and have been implementing them in the classroom. I love combining the two-teaching and technology. I am really looking forward to the winter break though.
Roman continues to amaze us with his vocabulary. He says his full name and has also started learning commercials and show songs. He loves to talk about animals and dinosaurs and will categorize just about anything. He has also been such a helper this month. When we go grocery shopping, he loves to put the groceries away. He even took all the toilet paper upstairs and distributed it out to all the bathrooms. I was pretty impressed. He has enjoyed all the recent holidays and is looking forward to Christmas. I am so happy that he has learned the true meaning of Christmas and he gets that it is Jesus' birthday. He tells you the story and tells you that he goes to church. Too funny!
Well, I would like to dedicate this blog to my new niece Ashlyn Love who was born on Thanksgiving to my sister Susie. This makes 18 grandchildren for my parents. WOW! She is beautiful and I can't wait to meet her.
We would like to wish you all a VERY Merry Christmas and a Happy New Year!
Enjoy all our new pics! We had a wonderful photo shoot with Roman with our friend Andrea who takes great photographs.