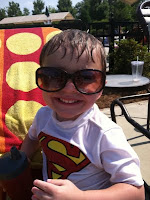 Well, summer is here and we are feeling the heat in Raleigh. We have had some adventures this past month. The blender has been used for those yummy summer drinks already and boo boo's have appeared on knees to show the evidence of summer play outside.
Rick went on a guys weekend trip to Charlotte. They attended the Nascar All Star Race. Unfortunately Jimmy did not win but Rick did get his picture next to his car. I know he had a great time. While he was away, Nana was here for a visit. We enjoyed some pool time, shopping, and going out to eat. We came across a Family Fun Day at a local shopping center. We enjoyed free ice cream, balloons from the clown, and games. Roman was unsure of the clown at first but after she made him a motorcycle out of balloons, he said, "She is not so bad." Nana was also able to watch Roman in his last session of T-ball for the season. He was awarded a medal. He was so proud of himself. We will give him a break over the summer and he will start again in the Fall.
Roman has made a new best bud. Our neighbor and Roman have been playing together a lot. Roman is always looking for him out the window. It is so cute watching them play. It is such a neat experience to watch your child become friends with someone and see how they interact. Roman calls him his best friend and he even has woken up in the middle of the night asking to go to his house.
One of our dear friends as moved out of town for medical reasons. It was sad to say good bye but it was great having them around while they were here. These friends have truly shown us the power of love and have kept such a great attitude towards life through all the ups ad downs. We love them and miss them!
Roman went to the dentist for the first time. He was unsure at first but he watched me go first. He then had his turn. He was such a good boy and they even gave him some cool glasses to wear. He had a clean bill of health and we will go back in 6 months.
The pool has opened and the Przygoda's have already spent a significant amount of time there. Roman beat his record as we were there for 6 1/2 hours one day. He was so good and enjoyed himself. Sunscreen is our new best friend. We look forward to many more days at the pool this summer.
Roman got a brand new bike. He is still a little too short to ride it but he was so excited when he saw it. He said, "Mom, I wanted one of these." This has been a common line of his. Every time he sees something or hears something, he will say, "Mom, I told you that." Another thing he said that I thought was hilarious was-"Hokey, Dokey Meomi (Naomi)". This was his response when I had told him something. He thought it was funny and he died laughing at himself.
We have enjoyed sunny days at the park and picking strawberries. Roman still needs to learn which are the good ones.
I was able to enjoy a relaxing 24 hour trip to the Beach with a friend. It was a great time and I feel so lucky to have some great people in my life.
Mango will be 5 on June 10th. She is still a little firecracker. She is finally starting to bond with Roman and they will snuggle together on the couch. When we told Roman is was going to be her birthday, he said, "Are her friends coming over to sing to her and will Mommy make her a birthday dog cake?" Well, we will probably sing to her but there is no chance I am making her a cake:)
I have 2 days left of school. The excitement that I feel is overwhelming that there are no words to describe it. They only thing I can say is bring on the summer-I need a break! I will not be working this summer so I am super excited to hang out with Roman and just be a mom.
We hope you all enjoy your summer-work or not! Don't forget the sunscreen!!!
Don't forget to check out our latest photos and videos.