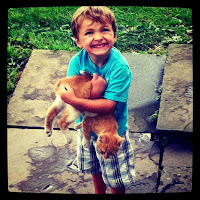 Well, we are pregnant! Most of you already know but it is now officially 'out of the box'. I am almost 13 weeks and so excited to be done with the first trimester. I am due on Valentine's Day. To be completely honest, this has been a pretty rough summer for me. I have had nausea throughout the days and nights. My energy was depleted because of not eating and the hormone changes sent me through a loop. I was not expecting this as my pregnancy with Roman was great. We are so thankful for a healthy pregnancy thus far though and are looking forward to the future. Roman is super excited and he is convinced it is a girl. We will see!
We spent a beautiful week in the Outer Banks with my brother and his family. It was so nice to be with family. The Outer Banks are gorgeous and we will definitely be going back. Unfortunately I was not feeling good while we were there but I did get to enjoy some beach time and I even got away for a little bit with my nieces for a pedicure. Roman had so much fun playing with his cousin Brooke. He enjoyed flying kites, swimming in the pool, collecting shells, and he even was brave to go in the ocean a little. He kept saying, "I am being brave!"
We spent a weekend in Baltimore with our friends to celebrate their daughter's Baptism. It was super hot in the old, Catholic church but it was a joy to share in this special event with them. Roman did great and sat quietly throughout the service. Rick was the God Father and we are so blessed to have such wonderful friends. Roman loves his little girlfriend Elisa.
After Baltimore, Roman and I continued on a trek to New York. This was unexpected but I wanted to get a change of scenery and needed some good, old, home cooking from Mom. It was a nice relaxing week there and Mom was great taking care of me. Roman enjoyed playing with his cousins as always, playing on 'Grammy's playground', driving Tractor Poppy's tractor, baking apple pie, picking fresh lettuce out of the garden, and playing with the new kitten, Lewis. I enjoyed a nice dinner with my brother, sister in law, and niece. My parents took Roman and I out to a nice, little lunch. We were also able to attend my two nieces birthday parties. We are never home for those things so it was nice to be around family and enjoy some of these fun times. I bought some apple cider donuts while home. These are so delicious and just one of those things you need to get when you go there. It's the small things in life that can bring such a big smile to your face and a warm feeling in your heart. My aunt and cousin were in town from Texas. It was nice to see them as we have not seen each other in about 9 years. Overall, it was a nice trip and I am so glad to have the family I do. They are wonderful and I miss them everyday.
Although I feel like I have spent the summer on the couch feeling awful, I know there has been some fun things going on. Roman and I have enjoyed going to the summer movies on Tuesday mornings, library time, morning walks, baking muffins, indoor playgrounds, and our newest activity puppet shows. There is a short little video of Roman's first puppet show. He was so excited about it but he kept saying I do it better than he does.
He has been so curious about everything. He wants to know what every word means and he will then continue to use it. He loves to use the word ridiculous. It is pretty funny. If he doesn't know what a word means, he will ask if it is a good word. He is learning that some words are not good and nice to use. I am so glad that he is concerned about using only the good words.
He has been doing good with staying in his bed at night. It does take some threats to have something taken away from him the next day but it is working. His mattress is now on the floor as he likes this better. He really needs a bigger bed but we are holding out a little longer until we get the nursery set up for this new baby. Transitions are slowly starting to happen and new beginnings are coming.
I am about to return back to school. I am kind of looking forward to the routine again and I know Roman misses Ms. Lora and his friends. We are also going to be celebrating our 7th anniversary on Saturday. I have a wonderful husband and I look forward to many more years with him. It is so comforting to know that you are with someone who you know that whatever life throws your way, you will get through it together. Hopefully we will take after my parents who celebrated their 47th anniversary and are still in love.
Next week my brother and his family will be here for a couple of days. We always look forward to their visits. This will be my last week of summer vacation. I am not one to wish time away and I am usually very positive but I am happy summer is coming to an end. This has been a rough one and I am looking forward to the new beginnings from here on out!!!