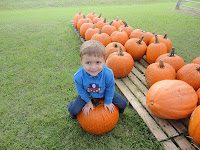 We have enjoyed the first couple weeks of Fall. The cooler weather is awesome and Fall activities are our favorite. Rick has enjoyed the start of Fall this year as he is back into hunting. He has gone out every weekend. He did manage to shoot one with his bow but the poor deer was never found. He did enjoy finding a deer that was shot by our neighbor though. Roman also enjoyed this. Roman is really into all the hunting things and he got upset when Daddy did not come home with a deer. He said, "Now we never get to eat deer." Not like he has ever eaten it anyways. We are looking forward to when Daddy does get one though. He has been both bow and gun hunting. My husband is a true outdoors man. I just love him in his camo.
We supported the Lung Transplant Foundation one Saturday afternoon. This is a cause that is near and dear to us and we are glad we get to participate in such a great cause. 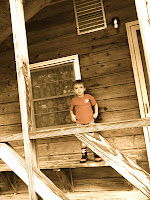 Two weekends ago we went to Virginia Beach. We went camping at Holiday Travel campground. We rented a cabin as it was Roman's first camping trip. It was quite rustic and he just kept saying that it was an old place. He seemed to enjoy it. Unfortunetely it rained the whole weekend and the Blue Angels Air Show was not so good. We did get to see all the planes but no flying. We ended up leaving early to come home. We are looking forward to when we get to go back and enjoy a full camping weekend again with Roman.
Roman has continued to play T-ball. Next weekend is his last session. We signed him up for a league and they will be starting to play some games. We are looking forward to this and will definetely be taking some video clips of this. I can only imagine what a bunch of kids ages 3-6 look like playing a game of baseball. 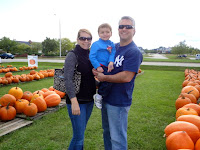 This past weekend Nana was in town. We enjoyed eating out, shopping, and the pumpkin farm. We went on a hayride, jumped on hay bails, played with the Tonka trucks and Roman went on a pony ride. He came home with a big pumpkin which he can't wait to decorate. We did however start decorating the house for Halloween. He wanted to hang up his spider webs and ghosts. He is super excited about his costume this year. He is going to be Flash. He tried it on and ran down the street as fast as he could to show the neighbor. It was hillarious to see this little guy dressed like Flash running down the road.
Roman witnessed his first car accident. Luckily it was not us involved. We were driving home the other day and the car in front of us rear ended (hard) the car in front of him who than hit the car in front of him. I saw it was going to happen so I was able to slow down and miss it. I pulled over as I witnessed the whole thing. Thank God everyone was ok. They were all shaken up but I was able to calm them down and get the police called. I had to give a statement and they were so cool to Roman. Roman thought it was cool to see all the police and action. He said, "I wish we could crash." I had to explain to him that it is dangerous. It is not like television where everything always works out ok. All in all it was quite an experience and we are blessed to not have been involved. 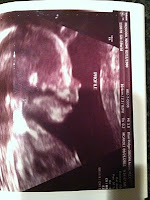 We are so excited to announce that we are having a BOY! I am 20 weeks and half way done. I have been feeling good and the doctor says the baby looks great. Roman has accepted the fact that he is having a brother and not a sister. He is excited and loves the nursery. I was so excited one weekend that I completed it. I know, super early-but at least I know it is ready. We are also excited that we decided on a name. We are going to call him Max Stone Przygoda. Stone was a family name and Max is just one that we like.
Roman has said some pretty funny things this past month. They include-"You are the best mommy in the city."(It used to be world but we have been demoted to city. In his mind the city is bigger) "Mommy, just buy it from dot com." "Boy, you are in a heap of trouble." (He repeats everything from the CARS movie.) Roman has also mastered verbally spelling his name. He is so proud of himself and will point out the letters in his name when he sees it. We were at the sports complex where he plays T-ball and the name of it is Dreamsports Center. He was looking at the sign and said, "Man, there sure are a lot of R's here."
We hope you are all enjoying your Fall. Check out my new blog. (www.getyourducksinarow123.blogspot.com) This is a blog where I post more often different organizational or just plain fun activities that we do. I hope you enjoy it and follow it often.
Also, don't forget to check out our photo album at the top to check out the latest photos from September.