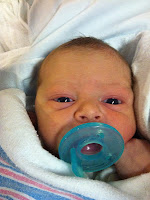 We are proud to announce the arrival of Max Stone Przygoda. He was born on February 22, 2012 at 3:59 am. He weighed 7 lbs. 15 ounces and was 21 inches long. Although he resembles his brother Roman he looks a lot like his Daddy and has some of those Italian features.
The birth story is one that we will not forget for a very long time....probably never. Monday night (20th) I started having some contractions and they lasted throughout the night so we decided to go to the hospital. The contractions were not that strong so they were not making me go into true labor. They sent me home and told me that I would know when I was in true labor...not able to walk or talk through a contraction. OK...well I continued to contract every 4 minutes throughout Tuesday the 21st (my actual due date). The contractions were getting stronger but I was still able to walk and talk through them. I went about my day...taking Roman to the store, going to the grocery store around 8 pm and walking the block at 2 am. Still, I was unsure what to do since I was contracting. We decided to go to the hospital anyway...worst case scenario they send me home again. We called the neighbor to come sit at the house. He arrived at out house right after 3 am. I opened the door to leave and my water broke. I looked at Rick and said, "Well, they won't send me away now." I did not even make it to the car and true labor had started. I was the most intense pain that hit me all of a sudden. The 20 minute drive to the hospital was very painful and stressful. I just kept breathing (between hyperventilating and moaning) and praying that the baby would wait for us to get to the hospital. Rick was very intense on driving and only ran 1 red light. We arrived at the hospital and needless to say the pain was so bad I could not walk. They got me a wheel chair and took me right to the delivery room. I was 6 centimeters. I asked for drugs right away and they looked at me and said it would be a little while because they had to take my blood and some other things. I than asked to use the bathroom and she said she would check me one more time. She did...3 minutes later I was 10 centimeters. She pushed the button and called for the Doctor to come immediately. The room flooded with people as this was such a fast delivery and they were concerned about the baby because he decided to have a bowel movement before I pushed him out. I was very chaotic but I knew I was in great hands. Rick was doing OK...he did get asked if he was OK because of the pale color his face turned. I pushed 4 times and Max arrived. It is so amazing what the body does and can endure. I was just not expecting it. Max was born at 3:59am. So Yes, that means my labor lasted 59 minutes and 20 of them were in the car. It was a very close call.
Max was taken away to the nursery to clean out his lungs and so on. Rick was with him the whole time. It was very hard to go through all of that and not be able to hold your baby. It all happened so fast but in the end a beautiful baby boy entered our world and changed it forever.
Roman is doing awesome and is very sweet and helpful. He gives lots of hugs and kisses. Max is very laid back so far and is our little peanut. We feel so blessed to have 2 healthy boys and we look forward to the future. Please check out the February photos to see our wonderful addition. February Photos