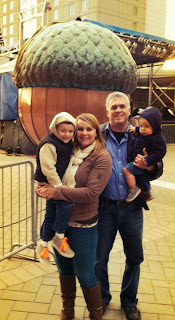 Well, I hope 2013 is starting off on a good note for all of you.  So far, we can't complain.  We rung in the new year with some great friends with a party at our house after hanging out downtown Raleigh for awhile.  After living here for 10 years we figured it was time to see the 'Acorn'.  Roman made it all the way to midnight and Max happened to wake up 5 minutes before so we all rang in the new year together. 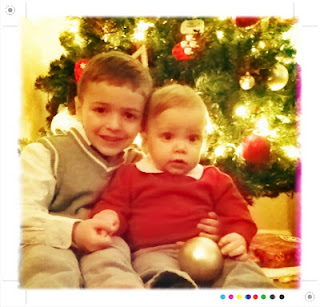 Well, I guess I will back up and tell you about our Christmas.  It was a special one as it was Max's first Christmas.  We enjoyed a Christmas Eve service at church and came home and tried to get the kids ready for bed so Santa could get to work.  Roman was so excited for Santa this year.  We visited him at the mall and Roman had no problems telling him what he wanted.  We watched Santa and his reindeer on the Live Reindeer Cam the whole week before Christmas.  My kids at school also enjoyed watching this everyday as well.  While we were at the mall Roman went on his first bungee ride.  They strapped him in and off he went.  He made them stop because his belly was hurting but refused to get off.  He tried it again and ended up enjoying it.  He was so proud of himself.  There is a video of it in our photos and video link.  Nana and Poppy spent Christmas with us and the tree was completely surrounded by presents.  Max was of course impressed with all the boxes and paper:)
Unfortunately Max got his first case of sickness this past month.  He had a fever and a bad cough.  He was up a lot during the nights and one night I was even on the phone with the nurse in the middle of the night.  You know if must of been bad if I was doing that.  He managed to get over it in a few days.  It was a little nerve wrecking as I am not used to having sick kids.  Roman was such a healthy baby.  I am convinced that Max picks up more germs because of him being a finger sucker-and boy are those fingers in his mouth ALL THE TIME.
Since the new year we had a cook out with the neighbors where Rick was able to show off his manly ability to use his smoker. 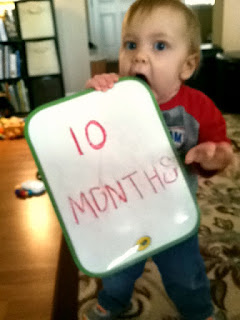 Max is now crawling around and taking a few steps with 5 teeth in his mouth.  He is saying, 'dada, mama, baba, and hi.  Hi is his favorite word.  He will do touchdown, clap, and reach up when he wants to go upstairs.  He loves eating table food more than baby food and is new trick is screaming.  At the top of his lungs that is.  He thinks he is hilarious and will laugh at himself.  Let me just say that it gets old really quick.  He is almost 11 months and I can't believe I have to start thinking about his first birthday.  Where is the time going? 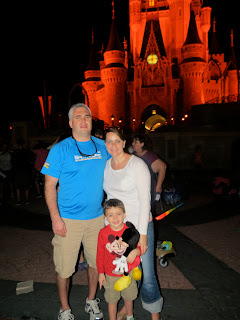 Our big story for this past month was our trip to Disney.  We left Max home with Nana and Poppy and off we went.  It was a nice drive down south and Roman had a blast.  We stayed at the New Orleans French Quarter on Disney property and it was amazing.  I will always stay on Disney property from now on.  We hung out at downtown Disney the night we got there after meeting up with my brother and his wife and our best friends from Baltimore.  The next day we went to Magic Kingdom.  It is truly the most magical place on earth.  We were able to ride many rides with little wait, meet and get autographs from many Disney characters, and watch the AMAZING light show at night in front of Cinderella's castle.  There is also a video of this...I never want to forget.  While we were there Roman celebrated his birthday.  Disney was awesome with this.  They presented him with a large cookie at one of the bakeries, called him by name wherever we went, made specials towel surprises for us in our room, and Mickey even sent over a signed picture of himself.  On Saturday we hung out at the resort and played in the pool.  That evening we watched a movie in the grass outdoors.

The next morning was an early one-for me at least.  I was up at 3am to run my first Marathon.  Our friend Chris also ran the race.  We took the bus over to Epcot and at 6:03 the fireworks went off and I was on my way to the most challenging accomplishment both mentally and physically of my life.  There were so many people and it was amazing.  I decided very shortly into the run that I was not going to make my time that I had set out for so I decided to take it all in and enjoy.  I stopped quite a bit for photos with different characters.  There were many times that I was exhausted but I knew I could do it and never gave up.  The feeling of crossing that finish line was awesome and overwhelming.  Tears came to my eyes as I realized that I could do anything that I put my mind and heart into.  This is a lesson I want to pass on to my boys.  There is no challenge too big that can't be accomplished with hard work and determination.  I was overwhelmed with the support I had from friends and family.  I know I said I would never do this again...BUT never say never.  The trip was AMAZING and we made memories that will stay with us forever.  I saw two signs while running that will stick with me forever.  "The last 100 runners impress me for than the first 100".  This is so true.  The ones out there in the back are the ones with the biggest challenge in front of them and they push through it with determination beyond what words can describe.  The other sign read, "Trophies will get dusty but memories will last a lifetime."  This is exactly what I told myself when I got down on not meeting my time.  I made memories out there on that course that no trophy could ever give me.  I am so proud of myself and I encourage all of you to pursue your dreams and overcome any obstacle you think is out of reach.  YOU CAN DO IT!!! 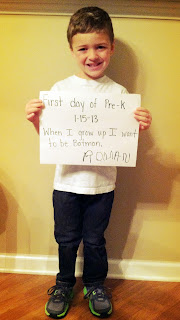 Well, the day after we got back from our trip, Roman started his new school.  He is now in a Pre-K class until summer where he will start Kindergarten.  He loves it so far and for some reason he is eating all the food they serve and drinking his milk.  Why is it that they do these things for others but not for us?  It was bitter sweet dropping him off as we know his time with Ms. Lora was over.  We are blessed though that Max is still with Ms. Lora and we have a couple more years of her pouring her love into our family.
Check out our photos from this past month.  There are a lot of them-taking photos is kind of fun.  I have been making books of photos from the year and it is so fun looking back on your year and remembering what life is really all about.