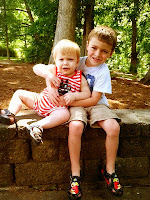 Well, I skipped a month...I have not done that in a very long while if ever.  I am not sure if that means I did not want to recall the past month or just way too busy.  HMMMM!!!!!  Something to think about.
It's a good thing I take a lot of photos because I honestly didn't remember what we have done.
I obviously ended another school year. 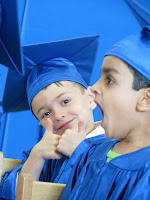 The summer began with Roman finishing up football and preschool graduation.  He was so cute in his cap and gown and I did shed a tear watching the graduation.  He is growing up really fast.  He had a hard time saying good bye as he became pretty attached to his friends and teachers.  His teacher told me one day that he told her when she got mad she looked sexy.  Thank God she knows Roman and thought it was funny.  I just had to laugh:)  Luckily we remain in contact with a few of them.
Roman had his first ER visit where he needed to get 2 staples in his head.  He ran into the banister (on Daddy's watch) and when I returned we decided that a trip to the ER would be best.  He was very brave and we went for a milkshake after. 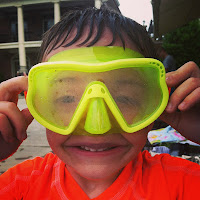 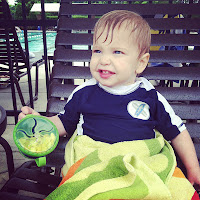 The pool opened and we have been there quite a bit.  We often meet friends there and Roman is becoming quite the swimmer.  He is in swim lessons right now.  He is a little fish and his brother Max is following in his footsteps.  Max loves the water slides and loves going under water.  That means he can not be let go because he will just fall in the water and think it's funny.  He has not learned yet that if it wasn't for mommy or daddy to pull him up it would not be so funny.
Nana came for a visit and Max learned her name pretty quickly.  He will often call her name even when she is not here.
We held a garage sale at out church with some friends/neighbors and all the proceeds went to orphans.  It was a fun experience and a good lesson for Roman.  I was surprised at how much stuff I had to give away-and I don't keep much for those of you who know me.
We have gone to the Durham Museum of Life and Science with friends.  I have tried to plan many activities for the boys to keep them busy.
Unfortunately some of our good friends/neighbors have moved away.  The most recent move was for our friends-The Wards.  We had a little going away party.  It ended up raining but the kids loved it.  They played in the rain storm and I might of joined them.  It is always hard to say good bye.

Like I said before, I am trying to stay busy with the boys and keep them entertained.  This summer so far as proved to be trying for me.  I am struggling with keeping the two boys entertained and happy as they are in such different stages.  Max is in to everything and wants to do what Roman does-he just doesn't know how to do it properly so therefore causes issues.  Last week we did send Roman to a day camp at a Farm.  He loved it.  He got to make homemade bread and a boat out of sticks.  Roman is testing the water with us.  We are struggling with him when he does not get his way.  It is so hard to get them to understand that life does not revolve around them and things don't always go as planned.  I am just trying to be consistent and hopefully it all works out in the end.  I get a little depressed thinking about the troubles we are having now and he is only 5.  What is the future going to be like????  I will just keep my head up and do what I can do.  God knows my heart and he will help in the areas I am struggling with.
Enjoy the photos from the past two months.
May Photos
June Photos