Fall is here and summer seems like a distant memory.  With the fall weather-which actually just arrived today, the wind has blown in a new chaos of life.  Just like the leaves changing, life often brings about changes and we have two choices-rake the leaves and burn them or enjoy their beautiful colors and embrace them.  We are enjoying all the color changes of life...that's what we say to ourselves anyway.
School is in full swing for Roman and I.  Max is still going to Ms. Lora and Rick is working on the opposite side of town has all of us.  Therefore the commute for me has become longer.  This has been a struggle as we are in the car longer with cranky children and a tired mama.  I remind myself though that Roman is at a wonderful school and Max is taken care of by someone who loves him very much.  I have a job that pays the bills and so does Rick.  Therefore...I can not complain.  I have way more than many people could ever ask for.  As Roman has transitioned into a school age child he is adjusting to the new schedule.  He is however been giving us a run for our money at home.  Is it him being tired?  Is it him testing us?  Is it us not having enough patience?  Probably all of the above but I need to remember that parenting is no small task.  It is a job that does not come with a manual and no one can train you on how to do it.  We are working on it and someday it will all be well worth it:)

Roman is doing great in school which is a relief.  We had our first conference with his teacher and she had nothing but good things to say.  He is excited about all the things he is learning and does his homework with no complaint at night.  He is growing up!  He rode his bike for the first time this past weekend without any training wheels.  He is so proud of himself.  He is such a cautious kid and I thought it would actually take longer than it did for him to be brave enough to just go.  We were able to capture the moment on video:)  Some funny things that Roman has said this month include-'I am not eating this, it tastes like Moose Meat.'  'Mom, just wait until you hear this song, it is as beautiful as a lullaby.' 'My Grandpa Roman is very special because he was named after me.'

Max is also giving us many smiles as well as making us use our parenting skills.  He is talking in more 2 and 3 word phrases.  His new favorite sayings are 'mine' and 'want that'.  He has learned where the snacks are kept and has learned to open the door and will reach and get his own.  This is not working out so we have to move the snack bins.  He actually likes to get them to feed Mango.  The first thing he does when he gets in the car is take his shoes and socks off.  He will sniff his feet and say, 'nasty'.  He loves dancing and will break out in his fancy moves whenever he hears music. 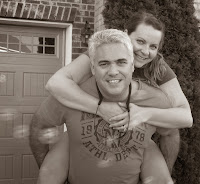 This past month we were again outside just about everyday.  Our neighbors are amazing and the kids just love seeing each other everyday.  We were able to get to a pumpkin farm when Nana was here visiting.  Max thought all the pumpkins were balls in the field and would pick them up and throw them.  We also had a neighborhood cook out where it ended up being a photo shoot for all the couples.  It was pretty hilarious watching everyone pose for these pictures.  We went to a friend's birthday party at a nearby train.  We took an hour train ride through the country.  The boys enjoyed it and it was my first time on a train as well.  Roman had a birthday party at a local jump house.  Our weekends are also busy even if it is just doing things around the house.  Hunting season is here so Rick has been up at the club a few times.  Unfortunately no deer yet.  I have taken on a project of making some wood creations out of pallets.  It will be interesting to see how they turn out.  I will actually be trying to sell them at a craft show in a few weeks.
So, even though life got chaotic with new schedules, misbehaving children on occasion, and unforeseen financial situations, things are falling into place.  This is the new norm and there is nothing I can do about it for now.  I am embracing it and making the best of what is handed to me at this point in time.  Things do work out for the better...just not always in our way or time frame.
Happy Fall!  Check out our September photos.