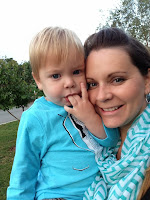 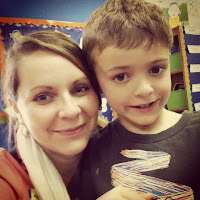 Fall is in full swing and October came with lots of fun.  We had a visit from Nana and went to the pumpkin patch farm.  We went on a hayride to pick out pumpkins where Max thought all the pumpkins were balls.  We enjoyed a train ride, giant underground slide, and looking at animals.
Roman went on his first field trip to another pumpkin patch.  He was so excited to ride the bus for the first time.  When I picked him up from school he said, "It was the most awesome day." 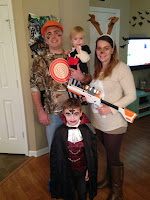 We decorated the house for Halloween and hosted a Halloween party with our awesome neighbors.  The costumes were great and the children all had a fun time.  Halloween night we had a neighborhood pizza party on the street and went out trick or treating.  Roman and his buddies were on the fast track to get to as many houses as possible.  Max however hung out in the wagon and watched.  After about 20 houses Max realized what was going on.  He got out of the wagon and went up to a door.  He tried to say trick or treat.  It was so funny.  He wanted to join in the fun.  We ended Halloween night with some mischief.  Our street was TP'd so we retaliated and got them good.  I LOVE living on Camden Yards Way!!!! 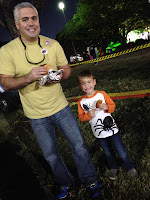 Rick and I took Roman to the fair while Lora kept Max.  We had a great time riding rides, playing games, eating food, and looking at the exhibits.  Roman rode a pony and enjoyed pretending to be a cowboy.  He can even talk like a southern cowboy.  He has been working on his southern twang.
I was able to volunteer at Roman's school one morning.  It was so nice being a parent inside a school instead of a teacher.  He loved showing me off to his friends.  I hope I can get to do it again.
Roman was invited to his first birthday party for a friend at school.  It is so nice to see that he is making friends.  Roman is loving school and his teachers have nothing but good things to say.  I am very proud of all that he is learning and he has gained a love for learning.  After I put him to bed one night he came and saw me a few minutes later.  He said he had to show me something.  He had written two sentences (including periods) on his chalkboard in his room.  I was so proud and he was too.  This is a boy who was not excited about 'doing work' at school a few months ago.  He is starting to read and has so many questions.  I am so blessed he got the teacher he did.  She has already impacted his life in huge ways in the past 2 months.  Other than teaching him, his teacher has taught him many songs.  He sings everyday in the car and has learned so many songs.  Hearing a child sing just makes me smile-especially when it is a child of mine:) 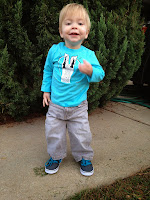 Max is getting bigger and bigger.  He is talking all the time and some of his new words include-I love you, oatmeal, and he is calling Roman 'Bobby'.  This is a nickname that Rick gave him a long time ago and Max is just picking up on it.  He is showing signs of the terrible two's a lot earlier than Roman did though.  He can be rough with other children by pinching their cheeks and saying NO quite often.  He is a climber and gets into everything.  It is so hard disciplining at this age.  Parenting is in full force in this house.  Roman is going through the 'furious fives'.  I am not sure if that is a real name but if not I just created it.  Roman will test us and push just the right buttons.  How can a child be so perfect at school and give us so much trouble at home?  We are figuring out what works with him and it is a learning process.  I know all children go through stages and parenting is no easy task.  It just seems hard when you are in the middle of it.  I just have to stay consistent and know that I am doing the best job I can do and Roman will turn out to be a great man.  This is something I am holding onto and keeping my eye on the big picture.
Roman does however bring many smiles to my face.  I try to focus on these times as much as I can.  He always says, "Back in the day" when he sees something that looks old.  The other day we drove by some old buildings and he said, "Mom, those buildings are from back in the 90's".  It made me chuckle because I knew the point he was trying to make but had no clue at the same time:)
Rick has been doing some hunting but no luck bringing home a deer.  I know he enjoys his time in the tree and even though I will never understand how sitting in a tree, freezing your butt off is relaxing...I am glad he has the opportunity to do it.
We have been doing some house projects.  We had the house painted inside which for those of you who know me-was not an easy task to leave the house messy and dirty for a week.  I survived and am so thankful to my wonderful neighbor for her help.
We are looking forward to more fall fun and am counting our blessings this Thanksgiving season.  We all have so much to be thankful for and I want to end the year on a positive note and keep my eyes on the big picture instead of the small circumstances that my come up.
Don't forget to count your blessings!
October Photos