End of Another Year!

This is going to be a long one.  I skipped my blog last month as life was a little crazy.
We enjoyed our Thanksgiving with friends.  It is so nice to enjoy holidays with people when your family is so far away and can't be with you.  If it wasn't for such good friends we would of just ordered Chinese:)  The week before Thanksgiving a few of us got together and put together bagged lunches for a local shelter.  We had the kids make cards for each bag.  It was such a great experience teaching them about giving.  I was able to get a girls night out and enjoyed Fondue.  These nights are so few and far between. 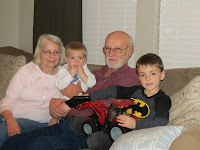 My parents joined us in early December for our first of many Christmas'.  The boys loved having them here and of course played with tractors and baked apple pie. 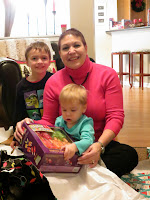 Rick's mom joined us the following weekend for our second Christmas.  The boys were of course spoiled.  We shopped, ate out, and enjoyed each other's company. 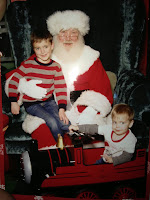 We also went to see Santa.  Max was not going to sit on his lap so luckily there was a train he could sit in.
I had the chance to play around with my camera and take a few photos of some families.  It was a fun experience and gave me an opportunity to make a little bit of extra cash and have fun with photography which is definitely become a hobby of mine.
We have had many parties/get together with friends in the neighborhood.  We have a neighborhood fire pit that we share and we have put it to good use.  We had some birthday parties to attend and of course they were a blast!
Rick has had a few nights out with friends to 'unwind' and he has also gone hunting.  Unfortunately he did not get a deer this year.  Thank God we are not living in the 'old days' where I need to count on my man bringing home the meat:)
Before Roman finished school for winter break they had a week of Christmas fun.  Rick went to school with him one morning and helped make Gingerbread houses.
As soon as December arrived, so did Charlie-our elf.  Roman was excited to see him again and of course Charlie was up to no good with all his antics.  Max got the idea of him and asked for him each morning.  It was fun watching them discover him each morning.  Max is still asking "Where Charlie?" each morning even though he flew back to the North Pole Christmas Eve.
So after a weekend with my parents, the following weekend with Rick's mom, my brother and his family joined us for a week at Christmas.  It was a lot of fun.  We played games, one of which was 'Minute to Win It'.  It was hilarious. 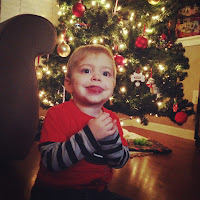 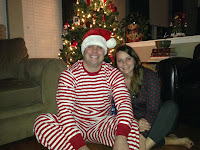 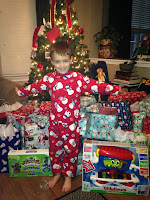 There were so many presents under the tree Christmas morning and Roman was so excited.  He came over to me and whispered in my ear, "This is the best Christmas ever!"  We enjoyed Christmas dinner with them and a few neighbors joined us as well.  Rick was able to fry his turkey.  After my brother left we had our friends from Baltimore and Texas in for a few days.  It was so awesome with all our kids together.  Rick and the two guys grew up together and it is not often we all get to get together with our families.  It is such a blessing to have great friends.  Even though you don't see each other often, you keep in touch and it's like the 'good old days' when you get together again.    While they were here we of course were up to no good again in our neighborhood.  We burned a tree in the fire pit and decided to decorate the remaining with bottles and put it in a neighbors yard.  It's things like this that make our street such a fun place to live.  We are truly blessed to have the friends and neighbors that we do.
It is finally calm here at the house after so many guests this month.  I would not of changed a thing but am exhausted. 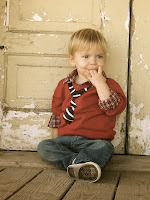 Max has been on the go 100 mph.  He is talking so much and will always let you know what he wants. He repeats and copies everything that Roman does.  He is saying 'I love you' and 'Bless you' all the time.  He loves a bath and thinks he is going to get one every time we go upstairs. 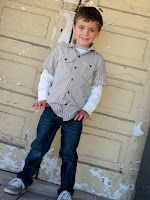 Roman will be 6 in two weeks.  He is such a little man and is very independent and helpful.  He is working on being the best Roman he can be when playing with friends as they all have strong personalities and things can get a bit crazy.  I guess that's what you get when there are 8 boys under the age of 6 on one street.  At the end of the day though, they all love each other and are making great childhood memories.
We have had a great 2013 with many ups and downs.  All of them making us stronger, more determined people.  We are looking forward to many more memories in 2014.
HAPPY NEW YEAR!
Click for the latest Photos