This summer has been a blast and many great memories were made. This summer more than any other summer has been one that I have not thought about going back to work. I have enjoyed the boys and have tried to take each day and treat it as a blessing. Yes, there were moments that were hard and I thought my patience was gone but the good times definitely out weighed the hard times. 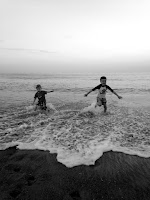 The boys and I went to the Outer Banks for a long weekend where we spent some time with my brother and his family. The kids had fun swimming in the ocean, jumping in the pool, playing mini golf, and becoming 'pool sharks'. Roman had a quick surf lesson and did great but his nerves got to him and he did not want to continue...maybe next year. Max learned how to jump in the pool by himself and although he can not swim, he is not afraid and will smile and laugh even though he is sinking. The boy has no fear and is going to give this mom many 'heart attacks' in life.
Our best friends from Baltimore stayed with us for a week. We always have a blast when we are together and I am so glad our children get to know each other although we don't see much of each other.
We enjoyed many play dates, trips to parks, swimming, and even an outside festival where the boys got to meet Spiderman, Mickey and Minnie Mouse, sit on a police motorcycle and enjoy a free game of bowling. The one thing we did not enjoy, is that Max had his first stitches. He tripped over a toy on the floor and hit his head on the ottoman. 4 stitches later and he is ok! May I remind everyone that the two times Roman needed stitches and this time with Max, I was not home...all on Rick's watch.
Rick and I were able to spend some alone time with Roman when we took him to the 4th of July fireworks. Besides the traffic getting out, it was fun. We also enjoyed a neighborhood 4th of July party on our street. As I have said before, our street is the best and we could not of asked for better neighbors.
Rick turned 39 on July 6th. This is his last year in the 30 decade. I used to think 40 was old...I don't think so anymore but I won't let Rick know that. He wears it well and I am so thankful for him and the blessing he has been as my husband and father of my children.
I was brave and took on a 14 1/2 car ride by myself with the boys driving to New York. Overall, the boys were great but I would not recommend this to any parent unless absolutely necessary:) After we were on the road for awhile things calmed down. The beginning of the trip was a little crazy though...it went something like this: Mile 24-I have been told three times already that New York is far away. Mile 37- I got my first, 'Are we there yet?' Mile 41- Windows are down because a kid feels sick. Mile 86- First snack given out. Mile 90- Snack all over floor. I was actually documenting the whole trip but thought this would make you laugh. If you have ever traveled with children...you can relate:) 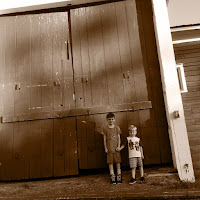 We finally arrived at my parents and the boys were so happy to see their cousins, Tractor Poppy, and Grammy. We spent all week with them having fun and catching up with family. The boys played in the creek, rode tractors, caught frogs, climbed trees, and any other thing you can think of when you are on a farm. Roman drove a ride on mower for the first time and he thought it was awesome.
While we were there we celebrating my niece Dakota on her high school graduation with dancing, food, picture booth, and lots of laughs. I am so proud of all my nieces and nephews and miss them more and more as I see them grow up. One unfortunate event that happened while we were there is that my nephew had a seizure for the first time. We were outside eating lunch and he just fell over. I am one to usually run and get help because I can't handle this kind of stuff but for some reason, I was the one to rush to his side and help. He is ok but it made me realize how special family is and that you just never know what the day holds. 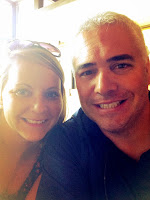 Rick was able to join us at the end of the week. I, being the brave soul that I am, took on an adventure and drove to New York City by myself to pick Rick up at the airport. It was quite an experience but I will say I did well and got through the city of cement with very little trouble. Rick and I visited his sister in Huntington, New Jersey. We spent a couple of hours walking around the town and enjoyed an early dinner together. 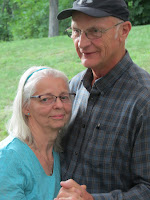 The last night of being home, we had a 50th Wedding Anniversary party for my parents. This was a party that was a year in the making with about 120 people in attendance. It ended up being beautiful and my parents were so happy. I have an amazing family that helped me pull this off and I can only contribute that to an amazing set of parents who have set such a great example in their life. I love you mom and dad and just like Tim said, 'It's been an amazing start and God is not done yet!' 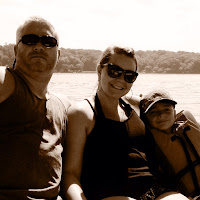 The following day we drove down the thruway to Syracuse to see some of Rick's family and than continued on to Rochester where we spent a couple of days at his mom's house. We took one day and rented a pontoon boat on the Bay at Lake Ontario. The weather was beautiful and it was so much fun spending time with Rick's siblings and Roman enjoyed helping drive the boat. Besides some bruises, blood, and scraps...it was a great time tubing and we can't wait to do it again next year.
Roman stayed there to spend some time with NaNa while Rick and I drove back with Max. He did great on the 12 hour car ride home. It is so funny how children are so different when they are alone and they don't have the competition or energy of their sibling. He did great in the car but we miss Roman and look forward to him coming home tomorrow.
We are going to enjoy these last few weeks of summer before school starts back up and a routine is back in place. It has been an amazing summer so far and just as I wrote on my chalkboard frame this month...'Thankful AND Blessed!'
Enjoy the pictures from this summer!!!