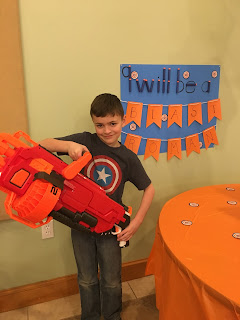 January started off with us celebrating Roman's 9th birthday. We went to Rochester for a weekend where we had a little party for him at his Nana's house with his cousin. He was of course spoiled with way too much money and gift cards. Thank God he knows how to save and really plans out what he wants to spend it on. He also had a Nerf gun theme party at my Dad's church (our house is just too small). Controlling children who each had a nerf gun in hand and endless supplies of darts was a challenge for this Mama. I am so proud of who Roman is becoming. He is a sweet boy with a big heart. He is very intuitive and analyzes life way more than I think most boys are at his age. He continues to work hard in school (this is a challenge for him) but with each passing day, he is striving to do his best. Even though he knows how to push my buttons, can get upset easily, and loves to have the last word, I love him to pieces and am so glad God chose me to be his mom. 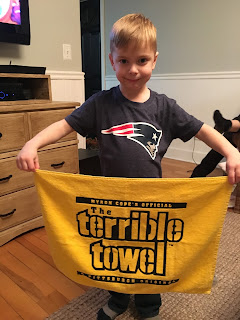 January has been filled with lots of football watching. The boys are thrilled to see the Patriots in the Superbowl. The biggest game for them was when they played the Steelers. We usually watch the games with my brother and his family. Well, this game was no exception. My brother is a huge Steelers fan and my boys are Patriots fans. There was quite the rivelry going on that night. My brother convinced Max to take off his Patriots t-shirt and fly the 'terrible towel' instead. After a few minutes, I saw Max in the kitchen just wandering and looking puzzled. I approached him and asked him what was wrong. He said that he was confused because he didn't know who he wanted to win. He was so conflicted. He wanted to fly that towel for his uncle but felt he was betraying his Patriots. It was the cutest, sad thing I had ever seen. Needless to say, he was kind of happy Patriots won.
The weather has been so cold here this past month. We have also had some snow but it has been icey snow, so not real fun to play out in. We have been cooped up in the house for too long and have been going a little stir crazy. It's hard for the boys to get their energy out in a small house but we have all managed...that is I have allowed for 'energetic boy play' in the house more than I usually do.
Rick and I did get out one night for dinner and a movie. We saw the movie Patriots Day. It was so good. The sad truth is, is that we do not live in a bubble and our days should not be taken for granted. Live each day to the fullest.
I continue to babysit some throughout the week but I have started pursuing what I am going to do once Max starts Kindergarten. I have decided that teaching is probably my best bet. I know I am good at it and it is the best schedule for working while we still have young ones at home. Again, I never thought I would go back...well, I think God has different plans. I am no longer fighting and making excuses but will pursue it and watch what will happen. I am currently in the process of applying for my NY license which should not be that difficult since I have a license from another state. It is just a waiting game and submitting paperwork. This process has once again reminded me of the verse that I chose for myself this year. "For I know the plans I have for you...plans to prosper and give you hope." Jeremiah 29:11 I stand on this and know that my timing and my ways are not always what is right. I will lean on my faith that my footsteps will lead me in the right direction.
This past month has also come with some sadness. There has seemed to be quite a few deaths around us-some close but others just acquaintances. Regardless, it makes me more aware of the ones I love and reminds me to take in each day as it may be my last.
Max has taken on a new hobby of singing and dancing. He loves to put on his headphones and sing along to his music. He also can not help but to move his body when he hears music. It drives Roman crazy when he sings, but I just adore it. He is also becoming quite the smooth talker with girls. He loves this little girl Emma that I watch. The other day in the car this was the conversation between the two of them. Max-Emma, are you going to marry me when we get older? Emma-Yes! Max-Will you kiss me when we get married? Emma-No! Max-You have to kiss when you get married. Emma-Ok!
This little conversation made me giggle.
Today is Groundhogs day and I am sad to say that Punxsutawney Phil saw his shadow. NOOOO! I don't want 6 more weeks of winter. Who am I kidding? I live in NY and we probably have about 10 more weeks of winter so I will take the 6:)

Cheers to warmer weather, making the most of each day, and planning your future kisses.
January Photos