Spring is almost here but the last full month of winter came with some ups and downs. 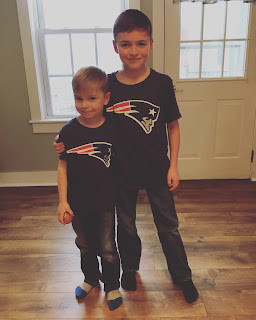 We started it off with a high (for the boys anyway) with the Patriots winning the Superbowl. It was a crazy turn of events. Both my boys just about lost it...I mean crying, hiding in the shower, and locking the door because they thought their team was going to lose. (Yes, I was embarrassed at this point as a mom seeing the reaction from my children.) As we all know, they turned the game around and my boys ended the night running around the house after ripping off their shirts and swinging them around their heads. The lesson learned from this night came from my mouth as I was trying to console one of my boys-"This will NOT effect your life tomorrow!" 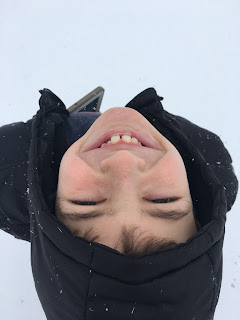 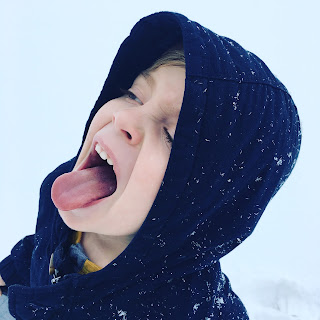 We did end up with more snow than we have had in the last 2 years here. We had a few snow days from school. Unfortunately, the snow was ice and the temperature was so cold that we did not get much play out of it this time. We all were just going a little stir crazy so we all had to get a little creative with our time. We would pretend that we were eating at a restaurant when I was making dinner. The boys would sit at the counter and make an order. It was surprisingly pleasant as they used their manners and ate most of their food that they were given. We also spent some time at Starbucks sipping on yummy drinks and taking advantage of the free Wifi:) 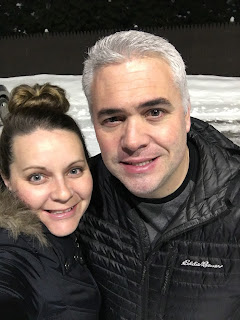 We had a lot of celebrations this past month. I turned 37. Rick and I were able to make it out to dinner and one night my parents had us over for dinner and some of my siblings joined us for desert. Valentine's Day was of course on the 14th. The kids were excited to show me all their valentines that they brought home from school. We did not make any special treats but I did shape their sausage for dinner into hearts...my sad attempt to do something with hearts. ( I mean everyone else was so I thought I was missing out.) One of my nephews turned 12 and Roman was able to go to that party.   Rick was not able to attend as he had a funeral to attend to and Max had caught the stomach bug (missing a day of school). Now, this may be disturbing to some but I need to document that Max decided to get sick at the local Hardware store. Yup, right there at the register. None else around to help. I quickly got him outside and poked my head back in the door to yell Sorry! I grabbed an empty bucket I saw laying around and decided it had to go with us in the car. Luckily we made it home with no drama and he was able to take a hot bath and a nap. Roman was able to escape some of this as he had a play date with a friend where he go to go on a snowmobile for the first time. 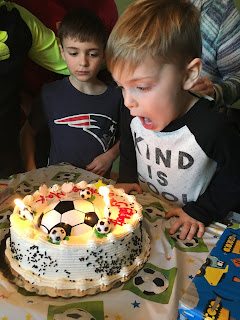 The following week the boys had winter break at school. We went to Rochester for a couple of days where we celebrated Max turning 5 with some friends and family there. While there, we also went to a museum where we got to see a kangaroo, mongoose (the kids favorite animal as this is what they call their dog Mango), alligator, and parrot all up close and personal. Once we returned back home we had dinner with some friends. These friends I have known since high school and it was like no time had passed. Even though they have 3 girls and we have 2 boys, the kids all got along well. I love how some people just stay in your life forever. You may not see or talk to them often but you know they are there and hold a special place in your journey. 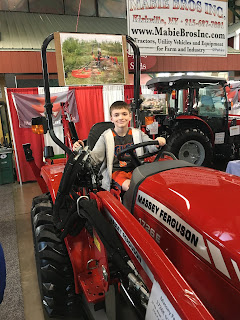 A tradition my father started a couple years ago is to take all the boys from the Francis family to farm days. They spend the day together and eat way too much. They end the day each getting a little something from the store. Roman came home with a fishing pole and memories were made with Tractor Poppy. Max and I were able to go to breakfast with my mom and sister on this day. Max will be old enough to hang with the boys next year:)
A few days later Roman inherited the stomach bug. It was a long two nights in the bathroom but luckily these were 24 hour bugs. Finally, things were turning around and we felt the sickness was gone from the house and we still had more parties to look forward to. 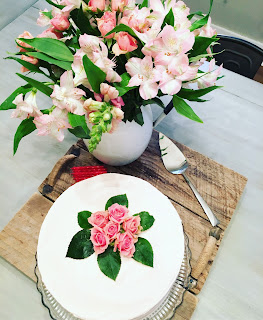 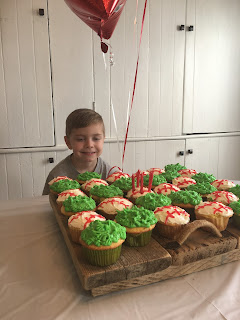 I am not sure what I was thinking but I planned on hosting 2 parties in a 24 hour period. Friday evening I put together a party for my mom's 71st birthday. Many of the family came and it was nice to celebrate her and her life. She is such an inspiration and and the strongest woman I know. That night it was a quick clean-up and the next party had to be started. I did a quick change from an elegant, simple, party with pink and flowers to a red and white, baseball theme birthday party for Max. Most of the family returned the next day joined by some friends. Rick was a little late as he had a second funeral to attend to. (We are hoping this is it for funerals for awhile.) It was a nice day and fun was had by all including a baseball piñata. It was a crazy 24 hours but I pulled it off. That night we were just going to relax so we headed over to my brothers house to hang out and eat dinner. Well, as soon as we got there, Rick started feeling not so hot. It was time to leave after he had spent quite a bit of time in the bathroom. So now we were 3 down, 1 to go. We all went home and early the next morning, I awoke with...you guessed it-the stomach bug. So, we spent the day in bed and luckily my boys spent some time with grandma and my sister to keep them busy as Rick and I were both out of commission. As of today, all sickness is gone and the house is clean. Not looking to live this week over again.
It is still very early in the process but we have put an offer, which was accepted on a house here in Berne. We are excited and will give more details very soon. We are just waiting for the inspection and closing. After that, we will know it is ours and we can give you all the details.
So, as you just read, we have had some highs and lows this month. We made it through and memories were made...some not so pretty but regardless this is life and we take each day for what it is.
Enjoy our photos from this past month. February Photos