When It Rains, It Pours...literally!!!

Well, I am not surprised that this post is coming out a week late. For most of you, a week late for a blog post might not sound like such a big deal but for this girl who is always on time and does not procrastinate...7 days late means only one thing...there has just been too many things on my plate. I am writing this late at night while everyone is asleep and the house is quiet. Late at night seems to be the only time that I get a moment to myself and to breath.

This past month has been so busy and for us and it is not always like that. I mean yes we get busy but it is just everyday things and doing spontaneous things. However, this past month has been filled up with schedules and for the first time in my life, I have had to rely on my calendar as there is just too much to keep track of in my head anymore. I don't say all of this to complain but I want this post to be a reflection of what life is really like right now for us. We are in a busy season of many unknowns and although frustration and tiredness follow...we are embracing it! (Well, at least trying to:) 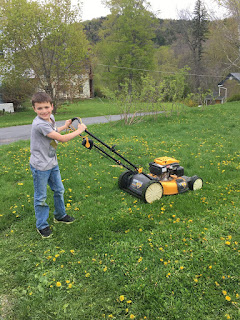 As you all know, we purchased an old house in town about a mile from my parents. These past few weeks a lot of work has finally started happening. I am learning so much as I am the GM on the job and coordinating a whole house renovation is definitely not for the weak. It is fun at times when design comes in but the technical stuff and organizing all the schedules of contractors is something I can do without. Needless to say, we are happy with the progress and we feel blessed everyday that we are able to live in our Dream House (sort of) in just a few short months. We have all (including the boys) gotten our hands dirty. This house definitely is being put back together with lots of blood, sweat, and tears. 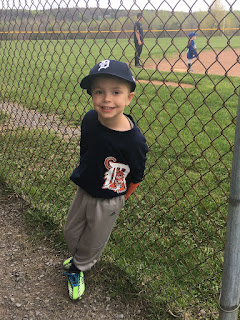 To add to the organized chaos (which I like to call it) is Max's baseball league. He plays about twice a week on a t-ball team and he absolutely loves it. He is always focused and has a great swing! I know that this boy will always be involved in sports and even on TV one day maybe (well, at least that's what a sweet old lady told me at his last game).  Both the boys will be playing in a soccer league and Roman will start tackle football in the fall with Pop Warner. He is beside himself with excitement as football is pretty much his entire universe right now.
When It Rains, It Pours!!!  I mean this literally and figuratively. This has been such a rainy spring that time indoors had us all going a little crazy. I mean the flowers are as tall as the trees and the grass is as green as a cucumber but COME ON...I literally was contemplating building an ARK. So, not only has it literally rained just about everyday around here...I could physically feel a 'black cloud' over us. There were so many things going on at one time that I did not know what direction to go in...I won't go into details but lets just make a list of some things this 'black cloud' was dropping on us (these are the ridiculous ones)...family drama, Rick working late E.V.E.R.Y single night, nephew hits a deer, brother wrecks his car, phone call from Roman's teacher, and so much more. There was one day that was actually going good after a week of a lot of mental and physical stress and I thought the storm had finally passed. NOPE! As I was finally getting a chance to sit Roman comes flying in the house because he stabbed himself in the leg with his pocket knife. No it was not on purpose and he was just being a typical 9 year old boy but blood was everywhere. Off to the ER we went and I realized the 'black cloud' was still there. He ended up with 2 stitches in his thigh. The only funny thing about this is that one week prior, my brother did the same thing while working in the garden:)  It was a sunny day today and the forecast shows more sunny days so I pretty sure the 'black cloud' is leaving. 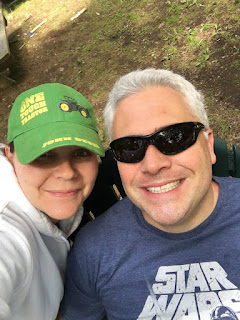 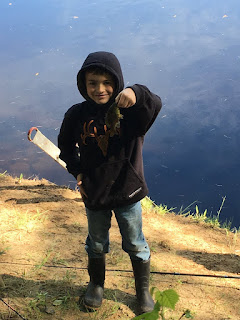 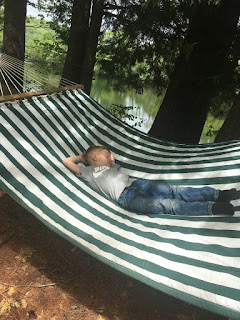 I did get to celebrate Mother's Day with some sweet treats from my boys and had some alone time. I was also able to get away one Saturday with my brother and sister-in-law and enjoyed some time at a flea market. We also enjoyed Memorial Day weekend with family at their camp up North. The weather was beautiful (believe it or not) right up until the morning we left. Family time is always the best and more great memories were made.
So all in all this month has had some good moments but honestly this month has wore me down. I have struggled to get through each day but I am a positive person so I keep on going. One famous quote my dad always says is, "keep on keeping on". This is exactly what I am doing despite the 'black clouds' that may come. The sun is always shining behind them. God knows what he is doing and I will not worry about tomorrow but put my trust that it will all work out.
I know this post has been a little serious and a little depressing so let me leave you with this...hopefully it will give you a little laugh.   After putting Roman to bed one night I was laying in bed watching TV. I heard noise coming from the bathroom and I assumed Rick was in there. After about 5-10 minutes I decided to see what was going on in there as I didn't hear the water running for the shower. I opened the door and it was not Rick, but Roman. He was standing there looking in the mirror, brush in hand with his hair all slicked to the side and he was smiling. When I asked him what he was doing, he said, "I am just practicing for the morning because I want to look handsome for school."
May 2017 Photos