It's A Spooky World Out There 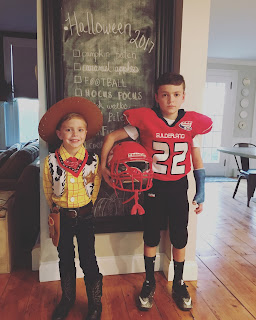 Fall is here and we ended the month with a blast with some spooky Halloween parties at the boys schools, parades, and trick or treating. This year Max was Woody from Toy Story and Roman was a football player (I mean, what else would he of been:) It was fun catching up with some friends while walking around. Halloween is not my favorite but the kids have fun and now all I have to do is to ration out the candy:)
The month was filled with lots and lots of football. The season has come to an end but it was such a blast. Roman grew so much as a player with the best coaching around. He made great friends and grew in character as a teammate. We were so proud of him and they ended their season with a record of 6-2. He is already talking about next year. The only down side to this season was that he was not able to play in the last game. He fractured his thumb playing football in the yard and is now in a cast for two weeks.
The house projects continued but we are almost there. The inside is complete except a very few small things which are on the agenda. Some landscaping, an outside deck, and work on the garage will hopefully be complete before the snow falls. We are at least at the point where our weekends are fun again and the house projects that are left, are being completed by others:)
We officially changed our address and so the boys bus routes have changed. We continue to take them to school in the morning but it is so much nicer to just walk out the door to get them off the bus in the afternoon. The schedule we are on, is so much nicer than it ever was in NC. I am still so grateful for this change of pace.
We opened up our house for our first party with the best friends and family we could ask for. We ate too much, drank too much, roasted s'mores, and had great conversation. The highlight of the night...(although this is kind of embarrassing) I will tell it anyways because it is hilarious. So Max and one of his best buds were taking all the drinks they could find at the end of the night and making concoctions. Apparently Max decided that they needed a beer to add to the mix. He got a beer out of the cooler and brought it to his uncle. These were his words..."Can you open this please, my dad wants it." So it was opened thinking he was bringing it to his dad. Well, the next thing I know I see him carrying an open beer bottle down the sidewalk. What a little stinker!!! Thank God they were not drinking these concoctions but were merely playing. He however was smart enough to use his dad as an excuse to get the beer opened. Maybe this story was funnier in the moment but either way it sticks in my mind.
It has been nice to have a home big enough to have family over. We have had many get togethers with other family and my parents randomly stop over...of course to always give us our 'surprises'.
Roman attended his first school dance...I doubt he danced at all but it was fun as he got to spend an evening with friends.
Evening though Halloween is a spooky time of year, I believe the whole month of October was a little spooky if I am being honest. As you just read we had some fun moments and made great memories. However, this past month has been filled with some not so fun things that have totally stopped me in my tracks. I don't want to go into too much detail but I will give you a little insight on my thought process during these times.
Although I grew up in this town and call it home, it has been difficult to feeling at home in this town. Yes, I feel at home with my family and my house but walking into a community where you have been away from for so long, you realize that a community is not just a place but a people and a feeling. You come across people who you connect with and start building relationships. For these people I am so grateful for. One reality that has hit me in my face this past month is that, not everyone out there is your friend, or is kind to you, or keeps your best interest in mind, or wants to see you succeed, or wants to work things out...all I can do is 'Let It Go'. Basically what I am saying is that, it's OK if there are people out there that don't like you. I am strong in who I am, I am conscious of my surroundings and I am ultimately satisfied with the way I raise my children.
This past month I have also been forced to reflect on what kind of person I am and want to be. The reality can be spooky sometimes. I have found myself in a rut with being caught up in the moment, focusing on the small things, and not keeping my awareness of others where it should be. All I can say is that when life smacks you in the face, be grateful. I am so grateful for the reality that I have been facing because it is only making me realize how strong I am, how strong I want to be, and how truly blessed I really am. I am taking it all in and letting it all go! I am choosing today that a perfect life does not exist and I am OK with living an imperfect life, raising imperfect children, keeping an imperfect home, and being an imperfect wife. It is my imperfectly, perfect life that I am living.
October Pictures