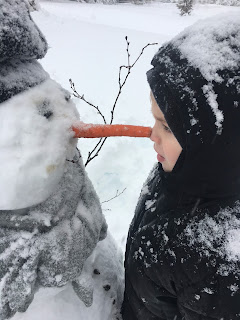 February is a very busy month for birthdays around here. It starts off with the most important one, which is mine:) We had dinner at my parents where my mom always makes me my dinner of choice. Some of the family came by after for desert which is also the birthday person's choice...this year I chose apple crisp-Thanks Mom! Another year older but I yet to feel it. My favorite gift this year was from Roman. He said that he wanted to make me laugh so he set up a Lego challenge. There is a funny video of him included in the photos when you check them out for the month.
We of course watched the Super Bowl and had a bunch of people over for a party. The boys were obviously disappointed with the outcome but they handled it well...there is always next year right? I mean, a team can't be on the top forever.
Max celebrated the 100th day of school. I was able to go in and help out in the classroom. I was in charge of having kids do different exercises for 100 seconds. It was pretty funny watching them all fall like flies...I am sure they all went home very tired. I love when I get to spend time with the boys at school.
This past month was also filled with sickness. Roman was diagnosed with the flu...not once but twice! A couple weeks later, Max came down with it. Thank God Roman did not get any symptoms other than a sore throat but Max on the other hand, got just about every symptom that comes along with the flu and he was out for about 3 days. A few doctor visits later, downing some medicine, many popsicles, and much rest...we are all feeling healthy and back to normal.
Valentine's Day is usually not a day we do much around here. One tradition we have always done is to do our taxes on this day. It used to be because we had a babysitter and was able to go sit with the tax guy but now we just drop them off but sticking with tradition, I don't drop them off until the 14th:) I did decorate the table and got a few fun things for the boys this Valentine's Day. I mean I love them all but what happened to the girl being pampered on this day???
I was able to get out one night this month with my sister in law, niece, and some friends. We did a paint and sip. It was fun but the painting is currently sitting in my basement...I wonder why? We also hung out with some friends for dinner one night. We are really trying to make a continue effort to make time for others and socialize with those around us.
Max continued swim lessons. He just finished up and moved up a level. However, he is not interested in continuing, which is fine. The point was for him to learn to swim and he did become a better and stronger swimmer so we will not push him to continue into something that he is not interested in. He also continues to take karate with my brother. He is going to be playing baseball. As soon as the snow melts, we can hopefully get out there to practice. 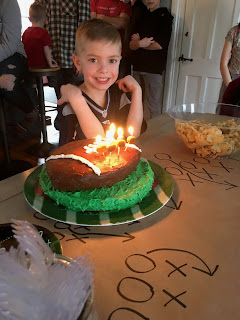 Max celebrated his 6th birthday. One weekend he had a friend over for a sleepover and the following weekend we had a family party. This year it was football theme...no surprise. Besides his birthday, we also celebrated my nephews birthday and a couple of my nieces also had their birthday. With a family this big, someone is always having a birthday. Two days after we had Max's party, we celebrated my Mom's birthday at our house. She is an amazing woman and she was worth a weekend of planning, decorating, cleaning, and baking. 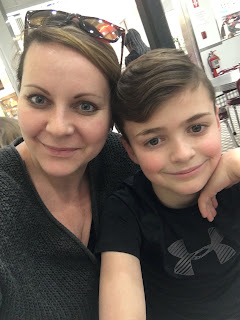 The boys and I had a few fun outings this past month. I took the boys to a trampoline park. I also took Roman and a friend to the movies and 5 Witts. 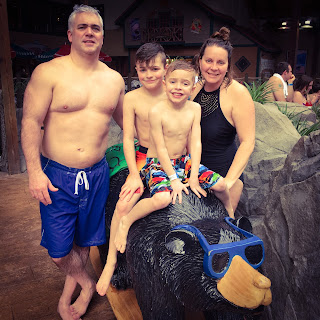 We also just took a long weekend and went up to Lake George Six Flags. They have an indoor water park. The boys had a blast and it was worth skipping a day of work and school. We will never get these days back so we make the most of it the best that we can.
The boys completed their Read-A-Thon for the Ronald McDonald House. I am so proud of how much they read. They raised $500 dollars together. Thank you for everyone who supported them. We know the money will go to help many families in need.
We have rented out our apartment. The adventures of being a landlord begins. We feel lucky with who we have found and I am sure it will all work out. I mean someone has to pay my taxes:)
As most of you know, I am not one who likes to cook. I do it because we obviously have to eat. But lately, I have received some meals from Hello Fresh. Cooking is still involved but thinking is taken out of the equation. Everything I need for the meal is delivered right to my door. So with these meals there area  few extra spices and ingredients I don't usually cook with. One meal consisted of potatoes with rosemary. They were delicious. However, as Roman took a bite, he made an awful face and said, "These potatoes taste like a Christmas tree." I guess rosemary is not his favorite...it made us laugh.
This year has brought on some challenges but we always seem to come out on top. We were as a team and try to keep things in perspective. I heard this saying the other day that I love and goes along with the way that I approach situations that arise. 'A problem is actually a solution opportunity'. I just love the positive twist that it puts on such a negative word. 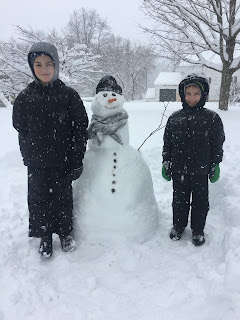 So much snow has fallen and we are expected to get more. We are looking forward to spring and more sun to melt away the snow.
February Photos