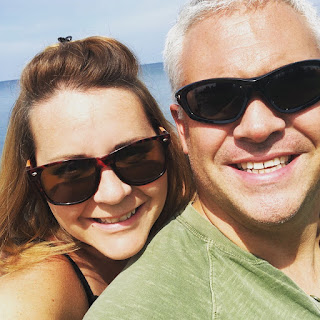 Well, summer is over as far as we know it. We are back in the swing of school but the weather remains warm so we are holding on to everything about summer still.
The month of August was filled with lots of great memories. August 6th marked our 14th anniversary. We went to my parents for dinner and I think we sat together on the couch that night:) These days "dates" come when we are free...which is not very often. 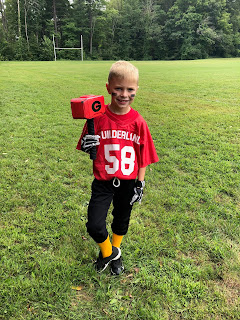 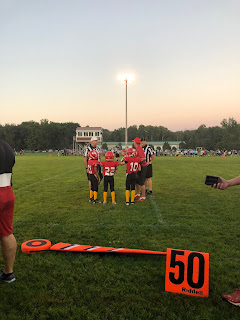 Football for the boys started in August. Roman is playing his second year in tackle and Max is playing flag this year (although he wishes to be with the big boys). We are once again playing for Guilderland Pop Warner. We have already had 2 games. Max won is first one, making 2 touchdowns and running over 140 yards. He is a beast! He is playing running back. His second game they lost by a touchdown but he still met his goal and made a touchdown for his team. Roman's team has lost their first two games but they are getting it together. Roman however, played well! He had some great tackles and one block which stopped a touchdown so we are proud of him. We always tell the boys, as long as they give it their all and do their personal best, that is what matters. We practice twice a week so it makes for a busy schedule with games on the weekend.
Before school started we made sure to get in some last minute fun eating ice cream, bowling, family birthday parties, going to the Lake, play dates, swimming, camping in the backyard (well a few hours anyway) and taking a few day trips. Max and Rick went to Saratoga Race Track one day and Max picked the winning horse and won a whopping $37. He was so excited. We also attended Knox Summer Camp and the boys had a blast playing sports and making a wooden candy dispenser. I was busy that weak with helping behind the scenes to get it up and going.
The boys both had their 6 month check-up at the Dentist and once again, NO cavities. One huge improvement this past month is Max has stopped sucking his fingers. This is something that he has done since in the womb. It is bitter sweet as I love when he snuggles and the fingers are in the mouth. My baby is growing up. 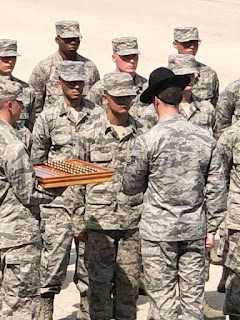 My nephew Alex graduated basic training with the Air Force in Texas. We are so proud of his accomplishments and we loved writing him letters and keeping him up to date with what was happening in the sport world. We have Face Timed him a few times and we miss him so much. 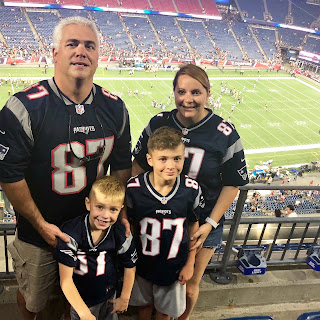 The highlight of this past month was our trip to Foxboro in Massachusetts to watch the Patriots play at Gillette Stadium. We surprised the boys. They were so excited. It was such an awesome experience to be at the stadium and watch our favorite players in person. 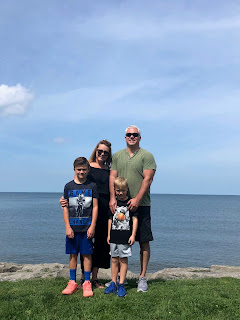 Labor Day weekend we had one more summer getaway. We went to Rochester for the weekend. We hung out with family, played scrabble, and threw the football until we convinced Max we had no more energy. On our way back home, we met up with my brother and sister in law and went to the State Fair in Syracuse. The boys had fun but it was a hot day and this mama was a little cranky...OOPS! Needless to say, I am glad we went and it is just one more thing for the record books. 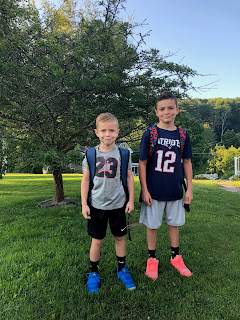 Now that we are back to school, we are back to a schedule. Roman is in 5th and Max is in 1st. I am teaching 3rd. Between school, homework, football, and other things that come up, we are busy but that just means we sleep very well at night. I finished up my graduate class with an A and I am signed up to take my second one next month. I am not looking forward to it as it will just be one more thing added to my plate but it's something I have to do. My confidence is boosted though because of the last class. My final project was apparently that good that the professor said it was the best she has seen since teaching the class and asked to use it as an example for future classes:)
Last weekend we attended Farm Day at a local farm. It was actually the farm that I grew up on. It is so cool to see a family taking such good care of it and I feel blessed to be friends with them as this place is such a special place and holds so many memories.
I hope you are all heading into fall happy and healthy. Check out our photos from the past month.
August/September 2018 Photos