Well, it has been all summer since I have last posted. This has been a summer of preparing for many transitions. The transitions were sometimes unknown and could not be foreseen so I think I was holding back on writing as I wasn't sure what was really going on sometimes. But before I get into that, let me reminisce about our summer. 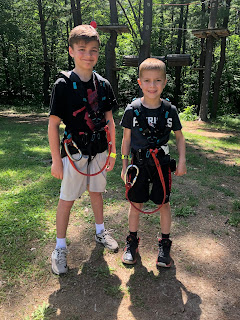 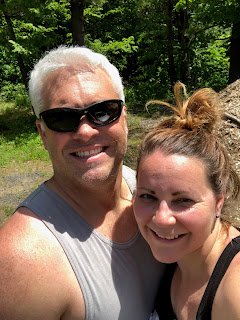 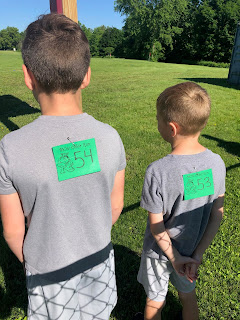 At the end of the school year, the boys ran in a Color Run at their school. Max did a 1K and Roman ran a 5K. They both did great and I think they both need to join track ASAP. This was just one way to get some exercise and get them moving. The boys 'helped' with the first cut of hay (well maybe more watching) on the farm. We also went to the ropes course at Thatcher Park where they both did great and went through it in record time. Rick and I even did the adult one and it was a blast but required muscles I forgot that I even had. 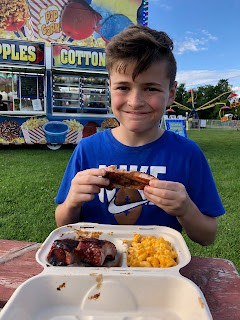 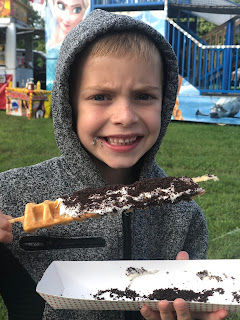 We went to the small local fair in town at the beginning of summer and one night we were able to watch skydivers jump and land on the baseball field and later that night enjoyed some fire works. 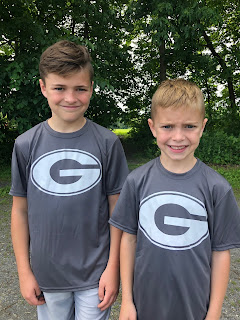 The boys participated in the football combine for their Pop Warner teams.
We did not go on any vacations this summer but we had lots of time spent with family. One of the favorite things the boys have enjoyed is doing scavenger hunts with their cousins. A four leaf clover was always on the list and I am proud to announce that I found my first four leaf clover this summer. 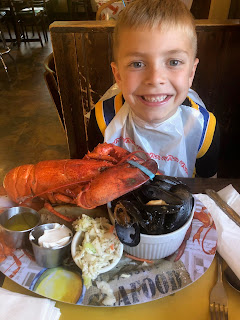 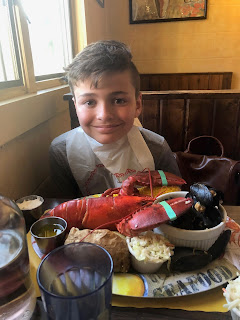 We had a couple lobster dinners as seafood is one of the boys favorite meals. The boys had many play dates, swam in the pond, and even cooled off in a bucket on the hot days. Fun does not always have to be expensive and on some expensive vacation...although I wouldn't mind that:)
Rick and I spent a day at my brother's camp up north where we were able to relax and float in the river. That same weekend was the fourth of July and I think this was the first year we skipped fire works. Rick celebrated his birthday and we spent a day in Syracuse with his family.
The boys both participated in a basketball camp one week. Anything to do with sports is a good thing for these boys. 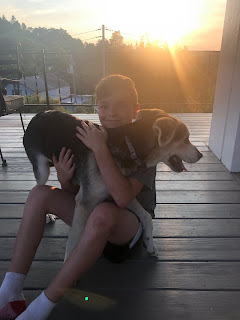 We also were able to dog sit my brothers dog for a few days. We enjoyed having Blue with us but Mango was not a fan. Mango is now 13 years old and is acting like a grumpy old lady.
Rick and Max spent a day up at the track in Saratoga. Max did not pick winning numbers this time but they still had a blast. I attended Rick's cousin's wedding shower. It was nice to have some girl time sipping mimosas. 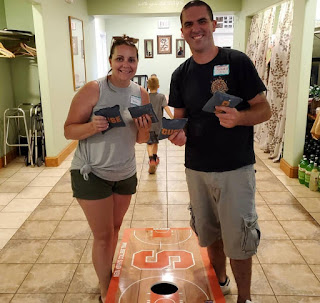 This summer was the Hendrick family reunion. One night we went out with some of the family to different breweries. It was nice to catch up with family from out of town. That weekend we also had some friendly corn hole competition. I am pleased to say, my cousin JR and myself were the champions! We celebrated my dad's birthday that weekend as well. The following week we celebrated my parents anniversary.
Rick traveled to Raleigh for work for a few days. He has not been back since we moved. He never travels for work but I think he enjoyed getting a break from his little office in our house. 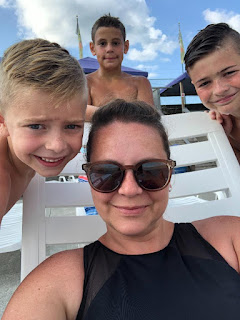 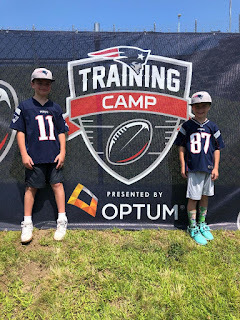 The one big outing we had this summer was a day at a local water park. We were there from open to close. We also enjoyed an evening out miniature golfing with my sister and her family. This day was fun and exciting but not as much as our quick trip to Boston for the weekend for the Patriots training camp. We didn't get any signatures this time but it was still a fun weekend watching some of our favorite players.
My niece moved to CA so we had a little get together to say good bye. There has been a lot of transition in our family and a few of us seem to be making decisions that will take us in different directions. 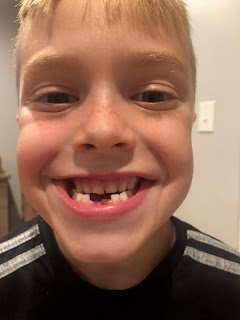 The biggest news of all from this summer...Max has lost his first two teeth. They were loose for months so he was so excited when they both finally came out. 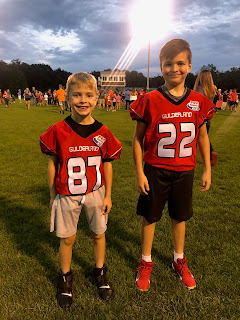 Football is up and running and the boys have their first games this weekend. They are both playing tackle. So from now until November, you can find us on the field.
So, let's talk about the transitions we have been going through this summer. We placed our house on the market, Rick sold his motorcycle, we sold a lot of our furniture, our house sold, we put all of our stuff into storage, and this week we will be moving back into my parents house....WHY? Well, we have decided to move to Texas. This is a decision we have been praying and talking about for over a year. We are very excited about the future and all the possibilities we will have by making this transition. We decided to stay here until November so the boys can finish out one last year with their football teams. The next couple of months will be an adjustment but it is short term and we have so much to look forward to. Rick and I have always been open to new beginnings. We go for what we want and seek out greater possibilities. We get one chance at life so we make the best of it and don't let fear stand in our way.
Summer 2019 Photos