Fall is always the best time in Upstate New York. The leaves change and you can see the beauty all around. Lately, fall seems to be very short. Thankfully we were able to enjoy some fun fall activities before winter decided to show up.
We did our annual trip to the Indian Ladders for apple picking, pumpkin choosing, and tasting apple cider donuts. This is most definitely on my top 5 favorite things to do in New York. 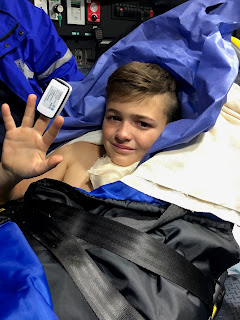 Football is also the biggest part about the fall. The boys had a wonderful season with Guilderland Pop Warner. The only downside to this season was Roman broke his collar bone with three weeks left. He was hanging out with friends at a Haunted House in town. I received a call that the paramedics were on their way and I might want to head back over to him. When I arrived, he was laying on the ground crying and very scared. The first thing out of his mouth was, “I know I am out of football.” The night ended with us in an ambulance taking us to the ER where after an x-ray, it was determined he had broken his collar bone. He was very sad but handled it as best as he could. He was in a sling for a couple of weeks. It was hard to accept, as this football season was the reason why we did not move earlier. Thank God Roman was able to play in the last game of the season…more on that in a minute. 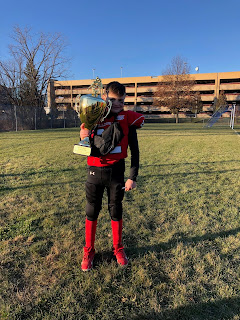 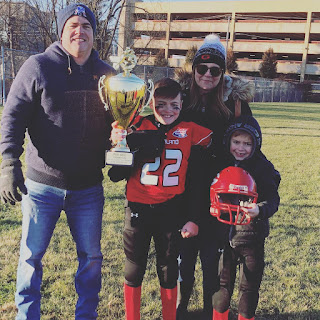 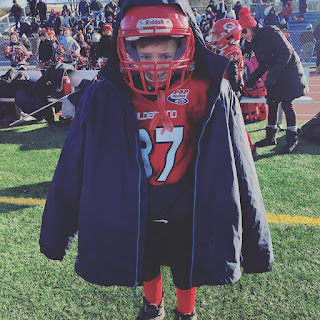 Max’s team made it all the way to the Super Bowl. It was probably one of the coldest days yet here and the temps were in the teens when we arrived to the field at 7:45 am. He was a trooper and although needed to be warmed on the sidelines between plays, he went out when he was called and did his job. Unfortunately, they came up a bit short and lost. I am so proud of Max for a great first year of tackle football. Watching my boys play always brings a smile to my face. Roman’s team also made it to the Super Bowl. They played a few hours after Max’s game. The temps were still fierce but his team was pumped and they were ready to play. It was a gamble but we decided to let Roman play in this last game. He woke up that morning determined to be a part of the team and bring home the trophy. He went out on the field and did his job as well. Watching this group of boys after the win of 13-12 celebrate, literally brought tears to my eyes. And…the tears did not stop. They presented Roman with a helmet and had the team sign it. For the last three years, this football program became a family to us. The friendships formed, memories made, and lessons learned will be with us forever. Saying good bye to the program and people who loved on my boys, made us feel apart of something, and brought us so much joy is not an easy thing. Words can not express how we truly feel. Football will always be in our life and the boys will continue to play but there will be no place like GPW…Go Dutchmen!!!! 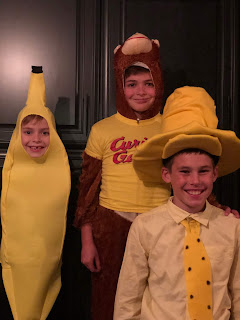 Halloween was a warm one this year. Roman was Curious George, his best friend was the Man in the yellow hat and Max was a banana. We went trick or treating in the nearby town. It was a fun night with friends.
Max has lost so more teeth and adding those to his Christmas list:)
This past month Roman has had more time with friends…just trying to get in as much time as possible. The move for him is not going to be an easy one. He of course does not want to leave his friends and the fear of the unknown can somewhat be daunting for him. I know he will do great, and he will look back on this and know it was for the best. Max however, is as excited as anyone to get to the warm Texan air and find adventure. He has a much more adventurous soul like myself. Change is hard but it is also exhilarating.
I ended my teaching last Friday. I loved my time at AWB and I am so grateful for the time they allowed me to be apart of that school. Adding Texas to the list of my teaching career is next in line.
We will miss our family. But having a place to always call home and come and visit is enough to hold us together. We will also miss the friends we made while here. There are a few of them who truly became family, loved on my boys beyond what I could of asked for, and will be apart of our lives forever…even if 1800 miles apart. This move has been more emotional than I expected. I am literally feeling every feeling there is and my tears are so complicated. Roman just keeps asking me, “Are you going to get emotional again?” When I think about why I am so emotional about this change, I think of my kids. I wonder if I am making the right choice. Yes I am. I am wondering if they will make new friends. Yes they will. I wonder if we will be happy. Yes we will. I wonder if we will forget what we have had here and the friends we have made. NO. NEVER. These last four years have literally transformed our family though all the good and bad times. We are stronger, closer, and ready to take on the next set of challenges that are sure to come.
We leave in four days. Travel time will be three days. The rest is history.
This move is no mistake. Moving back to New York four years ago was no mistake. I believe all things happen for a reason. We follow our heart and guts and they have not failed us yet. We are so eager to start the next chapter of our lives. Closing out this era is hard but a necessity.
Not anyone can just pick up and leave a place, but if you get the chance to make a change that you truly want….go for it. Whatever that change may be. We only live once and I want no regrets. I just pray that my boys will also know we did what we felt was best for them.

We don’t say good bye but see you soon.